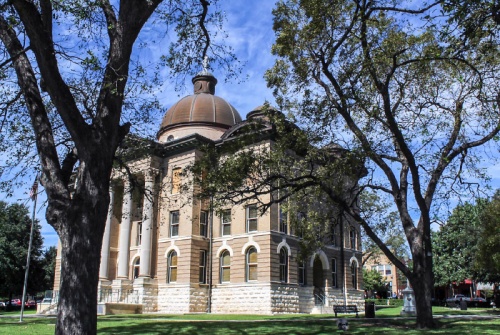 Hays County commissioners approved a list of vote centers for the November election as part of the new countywide polling election system, ending discussion on the topic ranging over several public comment periods and one special public hearing.

Countywide polling, a program run by the Texas Secretary of State’s office, allows registered voters to cast a ballot at any vote center, regardless of where they live; currently, only early voting allows voters to go to any location. Hays County approved its application for the system in March.

Many people who spoke at the public meetings on the location of the vote centers supported switching to the countywide voting system, but had had issues with the preliminary list of vote center locations the county produced.

Richard Cronshey, a Hays County resident for more than 30 years who lost a bid to unseat Commissioner Mark Jones in November, expressed support for the new system at a specially-called public hearing Aug. 19.

“I want to first thank the Commissioners Court and judge for going to voting centers; that is a tremendous step forward,” Cronshey said to applause from other attendees.

But Cronshey, like many members of the public who spoke at the hearing, noted that the Texas State University location on the preliminary list of vote centers was designated only as “TBD.”

“I can’t imagine why there is not one designated polling place at Texas State University,” Cronshey said. “Just can’t imagine. And they probably need to have two.”

The preliminary list of vote centers was first supposed to be discussed at the commissioners' Aug. 13 meeting, but confusion over what agendas had been posted online at what time led Judge Ruben Becerra to remove the item.

The Aug. 19 special public hearing was called in order to gather feedback in time for the final vote at the Aug. 20 Commissioner's Court meeting; the secretary of state’s deadline for polling locations was Aug. 22.

“I’ve called this workshop today because most of the community was excluded from this process,” Becerra said at the start of the meeting. “I am glad that we are now taking the time to discuss it further because this is exactly what our residents have told me they wanted.”

In addition to interest in establishing the LBJ Student Center as the voting location for Texas State, a theme at the standing-room-only Aug. 19 event was the geographic allocation of voting centers—in particular, that the initial list showed six vote centers in Wimberley and six vote centers in Kyle, despite the fact that Kyle has well over 40,000 residents and Wimberley’s population is closer to 3,000.

Laura Lee Harris, a resident of Plum Creek, spoke about both student voting and geographical distribution, noting the equal number of vote centers in Wimberley and Kyle.

“Not that I want to take any locations away from Wimberley,” she said, "but it does seem a little strange that a community that is one of the fastest-growing in Texas has the same amount of locations as the rather stable community in Wimberley.”

Harris also said she was concerned that, unlike in previous years, Chapa Middle School, located east of I-35, was not on the list.

Kyle City Council Member Daphne Tenorio, who represents the east side of the city, also spoke about the few voting locations east of I-35.


“It seems that I’m here every time it’s time to look at polling places, and I’m kind of getting a little bit tired of that," she said. "I’m having to come here to ask and plead to allow the east side of Kyle to be represented and given an opportunity to vote, just like everybody else is guaranteed in the U.S. Constitution.”

Commissioners concluded the Aug. 19 hearing by promising to consider concerns raised by residents.


"It’s important to me, and I know I’ve talked to some of my colleagues regarding the east of side of I-35," Commissioner Debbie Ingalsbe said. "I do see that there are some limits, for whatever reason, but I do feel that we can do better finding locations on the east side."

The next morning, at the regular Aug. 20 meeting, commissioners listened to further public comment, and then amended the list of vote centers and early voting locations out loud before approving it. A final roster was sent by Hays County Elections Administrator Jennifer Anderson later in the day.

The final list of vote centers includes both additions to the list posted with the agenda for the Aug. 19 meeting, and also shows that some locations were removed.

Early voting locations also came up for discussion and were approved during the same process. The city of Kyle was given only two early voting locations on the list attached to the agenda for the Aug. 19 meeting—Austin Community College Hays and the Hays County Precinct 2 office—neither of which are on the east side of I-35.

Kyle City Secretary Jennifer Vetrano appeared at the Aug. 19 meeting to ask specifically for additional early voting locations, and the final list included the addition of Kyle City Hall and Hays CISD Administration building in Kyle. Hays Precinct 2 office in Kyle was removed from the list, leaving a total of three early voting locations in the city.

The LBJ Student Center at Texas State University was also officially named as a location for both early and election day voting.