A crew from E-Z Bel Construction has been making progress on a new retaining wall as part of the Bitters Road improvement project near Blanco Road. (Courtesy city of San Antonio)

San Antonio has a new contractor for the West Bitters Road improvement project, with local officials saying the initiative is back on track for competition by the end of the year.

Work began in October 2020 on the $5.1 million project, which is funded by the voter-approved 2017 bond issue, CPS Energy and San Antonio Water System.

It involves intersection and sidewalk upgrades on Bitters from Blanco Road to Savannah Pass.

• Trails and Trees event set for Nov. 6 at Eisenhower Park

“Public Works was unsatisfied with the quality and progress of the previous contractor and chose to use E-Z Bel for the remainder of the project,” Berry said. “Out of respect for the integrity of the process, we are not naming the prior contractor.”

According to a project update the city emailed to community stakeholders Oct. 1, “there has been significant progress since the [contractor] transition.”

The project will produce new sidewalks on the north side of West Bitters; left-turn lanes on Bitters at Partridge Trail, Silverhorn Drive and Savannah Pass; and a right-turn lane from West Bitters onto northbound Blanco Road.

Recent project activities have included installation of new curbs between Bluff Manor and Savannah Pass, sidewalks near Bluff Manor, and the building of a new retaining wall.

The crew from E-Z Bel was also working at Bitters and Partridge Trail to add a center turn lane.

Shavano Park residents are invited to this free holiday festival at City Hall. 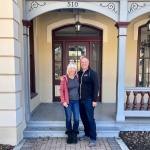 Hollywood Park City Council and members of the city's Economic Development Corporation board plan to have a joint meeting to discuss philosophy and other matters regarding business development inside the North Side suburb.

The St. Anthony Hotel, located at 300 E. Travis St., will be hosting an art exhibit featuring works inspired by "Giant", a 1956 Western drama.