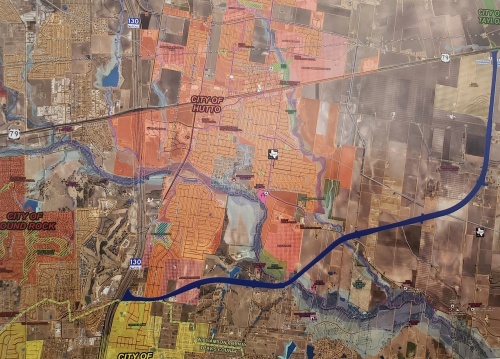 The proposed path for the Southeast Loop in Hutto was released to the public June 24.

The proposed path for the Southeast Loop in Hutto was released to the public June 24.

Williamson County officials, including Precinct 4 Commissioner Russ Boles, met with constituents in Hutto and surrounding areas about the project and plans moving forward.

Boles said continuing growth in the area has made it difficult for emergency services, school buses and even residents to quickly and safely move through the area.

Boles added the proposed plan has support from the city of Taylor, Hutto ISD, the Williamson County Sheriff’s Office and Emergency Management Services.

The $118 million project will span 9 miles beginning at CR 138 and move east toward CR 137. The road will then cross Brushy Creek toward FM 3349 and then north to Hwy. 79. The road will be two to three lanes, with a lane going in each direction and a potential deceleration lane, similar to Chandler Road, Boles said. The road will also have a bridge over Hwy. 179 and loop into the highway, Boles said.

Several constituents—including those from Norman’s Crossing—approached Boles at a county bond meeting May 14, asking the commissioner for clear information and transparency. The county released a version of this plan May 29.

Since then, Boles said he has met with every affected landowner that was willing to meet with him about the project and explained the plan moving forward.

The project will affect about 62 parcels of land with nearly 20 of them being farmland, Boles said. The previous route looked to affect at least 100 tracks of farmland.

Boles said he has worked to minimize the effects of the road by prioritizing what is needed.

“When I looked for a route, I looked at safety, efficiency, minimizing the number of tracks effected [and] crossing the flood plain,” Boles said.

Potential funding for the project will come from Williamson County through a bond, the Texas Department of Transportation, the Capital Area Metropolitan Planning Organization or a combination of the three, Boles said, but those all remain pending at this time.

Boles said once the finances are secured, the project will take five years to complete.

Boles added he also intends to present the project to the Commissioners Court in the fall to be added to the county’s long-range transportation plan, the county’s plan for roads in infrastructure when the county reaches full build-out.

“The growth is here; now it’s a matter of me putting the roads to match the growth,” Boles said.