Williamson County, the fifth fastest-growing county in Texas, continues to seek new roads to increase mobility and safety. The county announced its Southeast Loop study on May 29.

The study proposes connections for east-west routes between SH 130 and FM 3349 and north-south routes to US 79.

Previous studies, called A1, A2, E1 and South East Corridor, sought to address the need for area roads. On Wednesday, County Commissioner Russ Boles said plans along the A2 route were suspended to address property owners’ concerns and will not include Norman’s Crossing, a farming community southeast of Hutto.

“Our farming community has a rich history and is very important to our community,” Boles said.
“They, too, are incredibly concerned about the growth in this part of the county.”

The county will reach out to property owners, independent school districts, sheriff’s departments and fire departments over the next month to hear their needs.

Boles said a revised plan should be made in 30 days to provide traffic relief and reliable access for emergency responders. A final corridor concept will be announced by the end of 2019.

“We're going to collect as much data as we can,” Boles said. “But these plans have kind of been out there languishing.”

The proposed Southeast Loop is estimated to cost $118 million, Boles said. This will be paid for by the county, state and federal governments.

Taylor Mayor Brandt Rydell said this project is a top priority for the city and the Southeast Loop would be a convenient bypass to Austin for Taylor residents.

“I've been spending too much of my adulthood sitting in any one of those four traffic lights on [Hwy.] 79 going through town,” Rydell said. “And that gets pretty old.”
SHARE THIS STORY 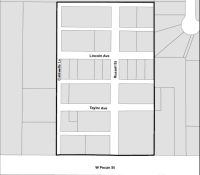