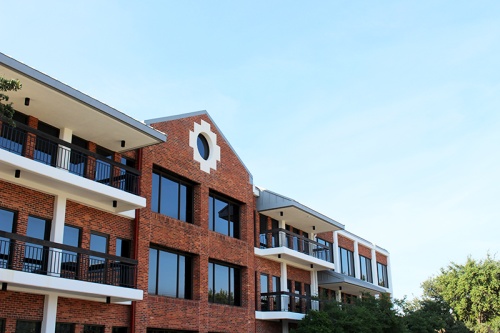 This property on Greenville Avenue is one of 11 empty office buildings in Richardson.

Roughly 15% of Richardson’s 23 million square feet of office space was available for lease in the second quarter of 2019, according to commercial real estate database CoStar.

The city’s vacancy rate is compounded by several large office buildings that are either totally empty or contain large swaths of contiguous vacant space.

These commercial vacancies are more a sign of success than failure, said John Jacobs, executive vice president of economic development at the Richardson Chamber of Commerce. Available space is key to maintaining a healthy and thriving market, he said.

“The analogy I make is if I’m running a car dealership, I want my parking lot full of cars ready to sell,” he said.

Despite their strategic advantage, vacancies are not exactly ideal for the city’s bottom line. The per-square-foot value of a building increases once tenants move in, meaning the city loses out on property tax dollars when offices sit empty, Jacobs said.

Already, corporations contribute 61% of the city’s property tax revenue. But that share would increase if vacancies declined, leaving residents to pick up less of the tab.

“There is a good and a bad side [to vacancies],” Jacobs said. “Hopefully in time we lease all that vacant space, and that encourages developers to build more.”

There are several reasons for office building vacancies in Richardson, but perhaps the most common is a history of corporate consolidations, said Mac Morse, adviser with Citadel Partners, a company that represents corporate users in Richardson.

“You have to peel back the onion and look at the history of the market,” he said. “Big corporate companies are not leaving Richardson; they are staying but consolidating.”

Some of Richardson’s largest employers opted in recent years to merge operations into a single building, Morse said.

The city’s office vacancy rate spiked in 2015 after State Farm and Raytheon cleared their satellite offices. But after consolidating into larger headquarters, the city’s occupied square footage rate increased by 12%, according to CoStar.

In some cases, vacancies can be explained by the type of ownership, Morse said. Institutional owners, or companies backed by investment trusts, may prefer to sit on a property until a tenant comes along that will generate the biggest profit, Morse said.

“They want the high-credit tenant to come in and sign a long-term lease,” he said. “They get a long-term return and throw it into the fund.”

Both buildings are owned by Austin-based Capital Commercial Investments and have been vacant for several years, Wright said.

The company’s intent is to eventually sell both buildings, but only after negotiating a long-term lease with a high-credit tenant.

“Better credit tenants with the biggest lease will garner more money on the market when they go to sell the property,” he said. “An investor is really going to value a building based upon the lease, not necessarily the brick and mortar.”

A portfolio of institutional owners is necessary in legitimizing Richardson as a major corporate player, Jacobs said.

“If you are not a bonafide institutional ownership city, it’s discouraging [to developers],” he said.

One of the biggest factors in the leasing success formula these days is a modernized workplace with access to amenities, Jacobs said.

“Just to say you have parking is not enough anymore,” he said.

Companies today place a high premium on the live-work-play environment as they look to attract the emerging millennial workforce, Wright said.

“Companies have realized that if they are going to recruit the best and brightest, they have to have the shiny workplace,” he said.

One office-space vacuum was created in 2011 when Fossil moved into its new headquarters. KDC acquired the three former Fossil offices, including one at 2323 N. Central Expressway that is still vacant today.

Initially, the plan was to try and sell the building as is. But as the demands of the workforce began to shift, KDC decided to sink roughly $6 million into modernizing the building, KDC Senior Vice President Colin Fitzgibbons said.

“The message we received from the market was that you need to spend some money to fix this up,” he said.

Richardson also invests in shiny new developments, such as CityLine. But that has not prevented the city from losing out to competitor markets.

The most recent example is Samsung, which had been one of Richardson’s largest employers. In August 2018, the company moved to Legacy Central in Plano, famous for the 20,000 square feet of food, drink and shopping options available to nearby employees.

The majority of vacant office buildings in Richardson are more than 20 years old. Many need drastic updates to attract tenants, Jacobs said.

“[Office buildings in Richardson] have got good bones, but you have to spend the money to get them leased,” Jacobs said.

The buildings at Galatyn Commons are a prime example, Morse said. California-based Spear Street Capital invested millions into an exterior and interior retrofit in 2016. Those buildings are now completely leased.

Setting appropriate rental rates is also key. Morse cited 3400 at CityLine, the spec office building at US 75 and Renner Road.

“They came out trying to fetch a pretty high number that was a little out of market for Richardson,” he said. “The second they lowered it, they were pretty well leased.”

Underscoring the success of Richardson’s corporate market is the combination of its renowned school district, its available talent and its geographic location. But perhaps the biggest factor is its business-friendly climate, Morse said.

“Richardson has done a really good job of building a positive corporate climate,” he said. “There are a lot of major companies that have been in Richardson for years, which is a testament to the city.”