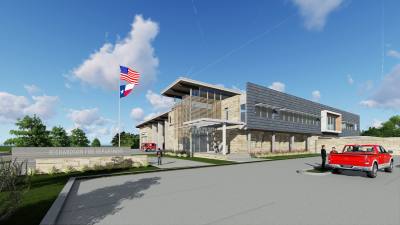 The public safety complex will include new buildings for the Richardson police and fire departments.

On the wall in Police Chief Jimmy Spivey's office hangs a black-and-white photograph from the late 1950s of Richardson's inaugural police force in front of the original City Hall—a simple white-frame building that also housed the city's police and fire departments.

Today the city of Richardson looks much different. The population has steadily increased and nearly every corner of the city has been developed, creating a demand for increased presence of public safety officials. Over the last decade it became evident the current police and fire facilities could no longer support the city's needs, Spivey said.

"I never dreamed [Richardson] would be as big as we are now," Spivey said. "As we have grown we have pretty much maxed out of the building."

In 2015 voters in Richardson chose to approve a $115 million bond that allocates funds toward the construction of the new public safety complex adjacent to where the departments are now on Greenville Avenue, north of Main Street.

The complex—which includes two separate buildings for fire, police and 911 dispatch—went vertical this summer and according to the city should be move-in ready by June, weather permitting.

While both departments will gain square footage, the new police headquarters will address layout inefficiencies caused by repeated additions to the current station's original footprint.

Officing similar units in close proximity is essential for productivity, Spivey said, so logical adjacencies were a key part of planning for the new headquarters.

"Police departments are made up of all different functions; to be efficient and effective you have to collaborate all of those different functions together so you're not tripping over each other," Spivey said. "This [current] building is not at all conducive to that because it started out as a room in the middle and was expanded. There is no logic to the organization of the building."

The department's 911-dispatch center will move into the new complex from an auxiliary facility at Lookout Drive and Plano Road.

"It is important that everybody that contributes to police service shares some space and knows each other—there is a familiarity and a commonality of mission and purpose," Spivey said.

Construction of a masonry wall around the building was one of several security measures drawn into the building's design, which Spivey said prioritized safety of personnel.

"Our people deserve as secure a workplace as anyone else," he said.

A gain of 80,000 square feet will include more office space and cubicles, a 100-person multipurpose room, larger locker rooms and a new fitness facility among other amenities. About 40,000 square feet of the current building will be retained to house the jail, which will be connected to the new complex via a skybridge.

Both the police and fire departments collaborated with RE:site Studio to incorporate a symbolic art piece into their respective building's design. For the police station a freestanding statue called "Radiant Shield" will be placed in front of the entrance to the main lobby and will incorporate features to honor Officer David Sherrard, who was killed in the line of duty in February.

The cost of the police portion of the complex is $45 million, Spivey said.

The apparatus bay, or the area where fleet vehicles are parked, will be expanded to include enough space for reserve fire trucks, ambulances and emergency medical services vehicles.

EMS supplies will be stored in a warehouse, which is a vast improvement from the overstuffed closets where equipment is currently stored, Poovey said.

Current accommodations include shared dormitories for firefighters who are working overnight shifts. Drawn into the plans for the public safety complex are individual rooms with a bed and a desk. Nongendered suite bathrooms will also be available to accomodate the increase in female firefighters, Poovey said.

"It won't make [the firefighters] any faster out the door or change what they do in the field, but it will make their time in the station much better and increase morale," he said.

The EMS division will be relocated from the department's training center in North Richardson to the new complex, which, according to Poovey, will improve workflow.

Latticework on the facility's facade will incorporate the shape of Richardson made up of Maltese crosses—the traditional fire service icon—to symbolize the department's protection over the city.

The cost of the new fire facility is $17 million, Poovey said.
SHARE THIS STORY

The latest iteration of plans has been greenlighted by the city plan commission, paving the way for council to once again consider proposals for Dave's Hot Chicken and Eiland Coffee Roasters on Oct. 11.

The new restaurant's menu includes specialties such as shrimp and grits, seafood vodka pasta, and lobster ravioli as well as oysters, burgers, tacos, wraps and more.

The new buildings will join the 2.6 million square feet of office space and 200,000 square feet of restaurant, retail and entertainment space already present at CityLine.