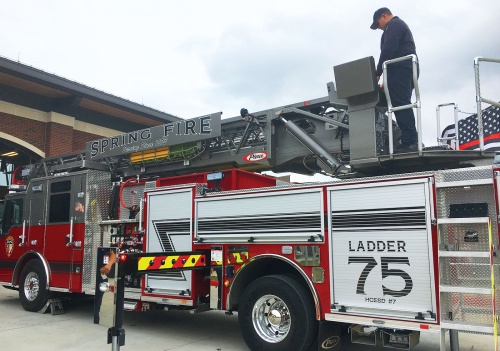 All fire stations in Spring and Klein, including the Spring Fire Department (pictured), rely on volunteers to remain fully staffed.

Faced with a growing demand for service, staffing shortages and a pay-parity amendment in Houston, fire departments and emergency services districts, or ESDs, in Spring and Klein are now also at risk of having funding limited by a bill in the Texas Legislature.

Senate Bill 2, which was passed by the Texas Senate Property Tax Committee on Feb. 11, would lower the property tax rollback rate, or the maximum rate allowed by law without voter approval, from 8 percent to 2.5 percent for taxing entities—including ESDs—that collect more than $15 million in property and sales taxes. To collect more than 2.5 percent in additional property tax revenue, the entity would be required to hold an election should the bill be signed into law.

State Sen. Paul Bettencourt, R-Houston, who was a joint author of SB 2, said the bill is meant to alleviate property tax levy growth, which he said rose 51 percent from 2013-17 in Harris County. But some local entities said SB 2 could curtail much-needed funds.

“I have a real concern about the bill,” said Harris County ESD No. 7 President Bob Schmanski, whose agency contracts with the Spring Fire Department. “If we want to keep our revenues where they’re at, it’s going to force an election.”

Meanwhile, fire departments in the area are striving to be cost-efficient and fund new stations amid rising demand for services. For example, SFD—which services 62 square miles of unincorporated Harris County—is working on a multiyear project to build a multipurpose building and training field at the corner of Louetta and Lexington roads. Likewise, Champions ESD’s new $3.9 million Fire Station No. 12 is slated to open in January 2020 on Cutten Road.

Across the board, officials with local fire departments and ESDs said their greatest funding challenge is the existing $0.10 per $100 valuation cap, which limits the amount of money ESDs can collect to provide services. For example, a property valued at $150,000 cannot pay more than $150 per year in property taxes collected by an ESD.

SB 2 could further restrict funds for entities that collect more than $15 million in combined property tax and sales tax as well as those that collect less.

Voters in districts that collect less than $15 million in combined revenue—for instance, ESD 28, which contracts with the Ponderosa Fire Department—would have a one-time option to opt-in to the lower rollback rate of 2.5 percent provided by SB 2, said David Clark, Texas Senate Property Tax Committee director. The tax ratification election would be held in May 2020.

Bettencourt said the bill is necessary because homeowners have seen their home appraisal values increase steadily in recent years, which means they are paying more in property

taxes—even if a city or county’s property tax rate has not changed. Additionally, any revenue generated from new properties in a city’s or county’s fiscal year are exempt from the 2.5 percent cap, so only existing properties from the previous year will be taken into account, he said.

Still, local entities voiced concern over the proposed bill. ESD 7, which serves an area that includes the northeast corner of Spring and Klein, collects roughly $22 million in combined ad valorem and sales tax—automatically qualifying it for SB 2, Schmanski said.

Some ESDs have already reached their limit with what they can collect from taxes. ESD 29—which provides fire department services as CESD—raised its tax rate from $0.08923 in 2016 to $0.10 in October 2017, increasing the department’s income by $338,000, CESD Fire Chief Dan Shelor said.

“It allowed us to increase our firefighter staff from seven on duty during the day to nine,” Shelor said. “The challenge is we’ve pretty much maxed out everything we can do right now.”

Shelor said the department, which staffs only part-timers and volunteers, would have to reduce the number of firefighters on duty daily if it needed additional revenue.

Demand for emergency medical services across Spring and Klein has generally risen in recent years largely due to population increases, local officials said.

PFD has also experienced growing population and demand for services, Windisch said. The department serves an area mostly west of I-45, including a portion of FM 1960. In 2015, PFD averaged 157 calls per month but now averages 190 per month, he said.

On Nov. 6, Houston voters approved Proposition B, a city charter amendment that would give firefighters incremental raises to equal the pay of Houston police officers. Proposition B has not been implemented as of late February, and several proposals to secure needed funding are still on the table—including using city of Houston reserve funds and laying off personnel from various city departments, Houston City Council Member Dave Martin said at a Jan. 31 committee meeting.

The base salary for a police officer in Houston ranges from $49,917-$65,825 per year, according to the Houston Police Department. In comparison, the base salary—excluding overtime—for a firefighter in PFD is $42,000 a year and $52,000 a year for SFD.

Reinkemeyer said he does not anticipate Proposition B to affect staff retention, but the exact implications are still unknown.

“If [Proposition B] affects us so we are not be able to retain our HFD duty crews, then we will have to reach out to other departments to try to supplement that,” he said.

KVFD relies heavily on volunteer staff to keep costs down, Reinkemeyer said. Roughly 120 out of 170 total firefighters at the department are volunteers, and the remaining work part-time. Only 43 percent of the department’s budget, which totaled $5.4 million for fiscal year 2019-20, is payroll, which Reinkemeyer said allows more funds to be used for training and special response teams.

“The problem is the pay for most firefighters [in general] isn’t as high as it could be for them to afford to care for their family with just one job,” Logan said. “[However], I really don’t anticipate any of our people leaving ... because now they are under [Proposition] B.”

The largest staffing challenge for SFD is recruiting new volunteers, Logan said. The department is working toward staffing eight of its nine stations 24/7 by mid-2019, when Fire Station No. 74 opens.