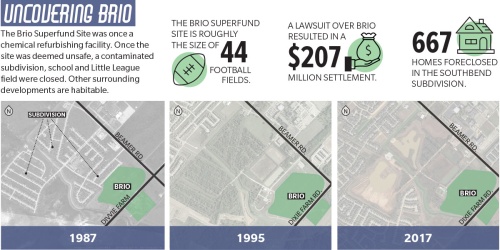 The Brio Superfund Site, located near Friendswood, has passed the federal Environmental Protection Agency’s five-year review. However, the site is far from livable, EPA officials said.

Today, the site is unrecognizable.

“If you drove around there, it is like a ghost town now,” Friendswood resident Cheryl Johnson said.

For 30 years, the Brio site was used for chemical reprocessing until it was shut down in 1982 and declared a superfund site, which means the government has stepped in due to what it believes are major environmental problems. Those who lived in the Southbend subdivision nearby developed chronic illnesses and birth defects. A school closed, as did the subdivision.

The EPA has since monitored the site to ensure dangerous chemicals leave the site in a safe way.

“For the last 25 years, it has been extremely safe. Does that mean I am totally comfortable in saying it’s safe forever? No way,” said Marie Flickinger, the EPA community liaison for Brio.

Brio History
The Brio site was owned by Brio Refining Inc. in its later years and was used for a chemical refurbishing facility from the 1950s to 1982. The dangers of dumping chemical waste were not fully known at the time, Flickinger said.

“The burn was supposed to burn off 99.99% of the chemicals, but that was not enough to burn off dioxin,” Flickinger said. “The thing is, they had never tested for dioxin.”

Dioxins are highly toxic compounds of chemicals and is typically a byproduct of industrial waste or pollution. With the other chemicals found on the site, dioxins were inevitable, Flickinger said. The completed incinerator was never used, but much of the damage on the site was already done.

Because the site did not have a cover, the air was full of contaminants, and the neighborhoods nearby suffered.

The Southbend subdivision next to the site was bought out, and Weber Elementary School, located on the site, was shut down in 1992.

Johnson was on the Clear Creek ISD school board when the school had to be shut down. She still has concerns about whether the site is safe.

“There is still enough lingering questions that it is fair to say, ‘Let’s check it out,’” Johnson said.

The site has been monitored by the EPA since 1993. It was taken off the EPA’s national priorities list in 2006. Around the site are San Jacinto Community College, the South Belt Stormwater Detention Basin and a subdivision. While the subdivision is near the site, it is not located in the same place as the former Southbend.

A recent report
The EPA released its five-year report in September. According to the report, everything is going according to plan but still needs careful monitoring.

“It’s serious, and it’s an issue, but it is not currently a problem,” Flickinger said.

The five-year study shows the short-term solution is working well, said Bill Rhotenberry, remedial project manager in the EPA’s superfund program. The short-term solution involved layers of dirt and clay over the contaminated area, with underground wells pumping out gases safely. There are also thick metal walls around the area and a tarp on top to prevent chemicals from spilling out of the area or into the air.

The only concern from the five-year report showed a migration of chemicals from the shallow pool of contaminated water in the sand layer of the site down to a deeper sand layer in the site. This is being investigated, as a layer of clay should have prevented this, Rhotenberry said.

In addition to the normal monitoring of the equipment—which occurs on the site daily—those on the site are now tasked with finding a solution for the chemical migration, Rhotenberry said. A short-term solution is to speed up the rate at which the wells draw gases from the pool to prevent any migration.

The groundwater, which is mixed with sand, is separated from the deeper water by a layer of clay, so the EPA is trying to find out how those chemicals were able to penetrate the clay, Rhotenberry said.

The EPA conducts yearly reviews of the site along with the daily monitoring. However, this is only a short-term solution, Rhotenberry said. The long-term solution involves achieving what the EPA calls “unlimited use and unrestricted exposure”: in other words, the ability to build and live on the site without danger.

While things are operating on Brio according to plan, the site is nowhere near the long-term solution, meaning the remedy will stay in place indefinitely, Rhotenberry said.

“Until those conditions are met, the remedy will stay in place,” Rhotenberry said. “[The EPA doesn’t] expect to get there anytime soon.”

Development continues
While the Brio area is not safe to inhabit, the areas around it are, Rhotenberry said.

“It is safe. As far as the areas that are zoned for residential, I don’t think that is an issue,” he said.

Though the area is safe, there has been concern recently with dirt around the site, particularly dirt moved to 2811 Dixie Farm Road for the former Parkwood Plaza development in February 2018.

The dirt was moved from a lot adjacent to the superfund site, but was not contaminated, representatives from the Harris County Flood Control District said.

Both the location of the dirt and the potential flooding risks were concerns,  said Shawn Johnson, a lawyer in Friendswood and Cheryl’s son, in a previous interview with Community Impact Newspaper.

According to the Harris County Flood Control District, the dirt never should have been placed at 2811 Dixie Farm in the first place. However, the dirt is not contaminated and has been tested several times, the district said.

“No soil from the Brio Superfund Site is being excavated by the Flood Control District,” the district said in a written statement to Community Impact Newspaper.

As development continues near the Brio site, the site itself is years away from being safe for use. In fact, it may not ever be safe, Flickinger said.

“They have to keep monitoring. That’s forever,” Flickinger said.