3 transportation updates to look for in Pearland and Friendswood 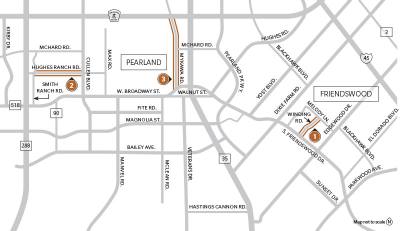 The waterline for the Hughes Ranch Road project is currently being constructed. The city of Pearland plans to send in the bid for the project in mid-2018 so that construction can start in fiscal year 2018-19. Construction will include reconstruction of CR 403 from Cullen Boulevard to Smith Ranch Road from a two-lane asphalt open ditch roadway to a four-lane concrete curb and gutter boulevard for two miles.

The city of Pearland has just submitted a design contract on the Mykawa Road project to the Texas Department of Transportation for its review. Construction on the three-mile stretch of Mykawa from Beltway 8 to FM 518 will consist of traffic signals, four-lane concrete curb and gutter-divided boulevard section roadway, including storm sewers, outfalls and detention.