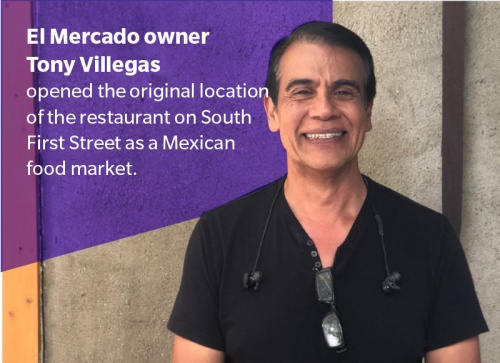 opened the original location of the restaurant on South First Street as a Mexican food market.

Tony Villegas, owner of El Mercado, said he remembers the first 15 years of running the Austin Tex-Mex restaurant as the golden era.

El Mercado opened on South First Street in 1985 as a Mexican food market with a small kitchen, where customers could pick up masa or spices and grab something to eat at the counter.

Eventually, customers wanted a place to sit down, and so Villegas and his father, Camilo Villegas, had to clear out some of the shelves to make space. In time, the restaurant swallowed up the market as El Mercado’s expansion continued to an outdoor patio. In those days, Villegas said, business was good for Tex-Mex restaurants in Austin.

Then, around 2011 or 2012, Villegas said the Austin population boom hit, and skyrocketing property values in a changing neighborhood created challenges. Villlegas said four years ago, he paid about $36,000 in annual property taxes at the South original location. This year, that bill was more $100,000.

Land values have made it difficult for El Mercado to break even, according to Villegas. Some longtime Austin staples, such as Threadgill’s, have chosen to close rather than continuing to battle those changes.

But Villegas said he does not have any plans to get out of the restaurant business or to close any of El Mercado’s three locations.

Some of that tendency to hang on may come from his family. Camilo, Villegas said, greeted customers and fixed anything that might break in the restaurant until the day he died in 2007 at age 82, and Tony’s mother, Gudelia Villasana Villegas, drove herself to work at the El Mercado office until her death this August at age 90.

Villegas said he’s still doing his best to follow his parents’ example, and his favorite customer feedback comes from that same ethic.

According to Villegas, when diners say “the owner is always there, and he always cares,” it gives him inspiration to come to work every day.