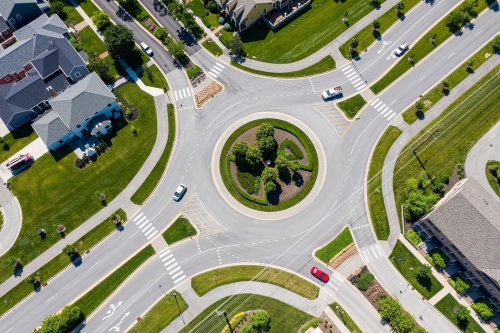 McKinney will construct its first multilane roundabout in 2020.

Construction will soon be underway on what will ultimately become the city’s first multilane roundabout, which is expected to be complete by mid-2021.

The city of McKinney hired an engineering firm in 2018 to look into roundabout implementation. Several locations were found to be feasible, but the city deemed the best location would be at the intersection of Ridge and Wilmeth roads once Ridge is extended north of US 380 to Wilmeth.

Construction of the Ridge extension is expected to start in the first quarter of 2020. This project is expected to cost $22 million and is funded through previously issued bonds, roadway impact fees and developer contributions. The extension and the roundabout are expected to be complete by May 2021.

In addition, a project to expand Wilmeth westward between Hardin Boulevard and Lake Forest Drive is currently in the design phase. Roundabouts are also expected to be placed at the intersections of Hardin and Wilmeth and of Lake Forest and Wilmeth in future projects.

This roundabout corridor is expected to further support mobility needs north of US 380 and west of US 75 by providing an additional east-west travel option, according to the McKinney Capital Improvements Manager Nicholas Ataie.

McKinney city staff predict a multilane roundabout will increase traffic capacity by reducing the number of stops due to traffic signals.

The city also found that roundabouts will be more beneficial for drivers than traditional intersections, according to Ataie.

“Roundabouts provide substantial safety and operational benefits compared to other intersection types, most notably a significant reduction in severe crashes involving injuries or fatalities,” Ataie said in an email.

According to the city of Frisco, which employs a multilane roundabout at Ohio Drive and Warren Parkway, drivers entering a roundabout must wait for a gap in traffic before entering the circle. This means drivers in the circle have the right of way and must yield to circulating traffic, pedestrians or bicyclists. That pause encourages caution in and improves the safety of drivers.

In addition to being safer, roundabouts are also less expensive and easier to build than traditional intersections because they do not require the installation of traffic signals and other equipment. Also, given their lack of traffic signals, roundabouts are expected to reduce air pollution; since cars will not have to stop and start as much, vehicular exhaust emissions will be lowered.

Of course, for these benefits to come to fruition, McKinney drivers will need to be aware of the rules for roundabouts. To that end, the city intends to provide some instructional information.

“Prior to opening of the roundabout, the city of McKinney will be providing educational and outreach materials to the community regarding proper roundabout use, best-practices, and safety,” Ataie said in his email.