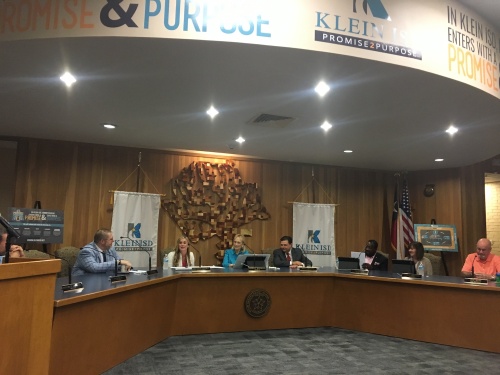 Klein ISD received the 2019 Population and Survey Analysts report in an Oct. 21 board of trustees meeting.

In a Klein ISD board of trustees meeting Oct. 21, the district received the 2019 Population and Survey Analysts demographic study, in which it states kindergarten enrollment is not expected to continuously increase despite an increase in recent births, and student enrollment at charter schools will continue to grow.

The report considers various factors—including student enrollment growth, housing trends and regional economic trends—to estimate low-, moderate- and high-growth scenarios for the district to use for future planning. According to demographer Justin Silhavy, projections for the low and moderate scenarios depend mainly on housing projections and the effect charter schools will have on the district.

“The gap between the low and the moderate is much larger,” Silhavy said. “Two reasons: multifamily growth unknowns after 2023 and also charter schools after about 2022.”

Due to a recent increase of babies born to mothers residing in Klein ISD, the PASA report suggests the district's kindergarten student enrollment could increase between 2020-21. However, this increase is expected to level out and eventually slightly decline, according to Silhavy.

Klein ISD’s overall growth is expected to slow in the future, mostly due to the area’s increasing urbanization. While the district’s close proximity to major job hubs will contribute to some growth, consequential decreases in land availability for potential residential areas will slow growth in the future, as previously reported by Community Impact Newspaper.

In addition to decreased land availability, an increase in students attending alternative schools also contributes to the gap between decreasing kindergarten student enrollment and births in the district.

“Usually, when we see kindergarten enrollment higher, it’s quite a bit higher than [births]. ... That means we have a lot of housing, so people have moved in with babies,” Silhavy said. “But we’re not seeing that as much anymore; plus we’re seeing more transfers into other schools.”

Student enrollment in private and charter schools is expected to continue growing. According to the report, The number of Klein ISD residents attending other public school systems has grown at a steady rate over the last five years. In 2018-19, a total of 1,065 charter school transfers occurred.

Out of the 57,149 students who reside in Klein ISD, about 2%, or 1,126 students, are enrolled in charter schools, according to Silhavy. Over the next five years, this enrollment is projected to increase to 1,470 students. Silhavy said a charter school built within the district would have a definite effect on student enrollment.

“I guarantee you, if you get a charter school built right across the street, in the heart of Klein, and it’s geared toward the demographic that lives in this part of the district, you’re going to lose students,” he said.

The report highlighted three charter schools planning expansions near the district. IDEA Spears plans to open in the fall of 2020 on 2010 Spears Road, Houston. Silhavy said the school plans to operate about another eight sites over the next four or five years in the Greater Houston area that could affect Klein ISD.

“We don’t know where all [IDEA schools] are going to be located; I wish we did,” Silhavy said. “They’re primarily going to pull from Spring, but I’m fairly certain you’ll see 100-200 students from Klein ISD.”

The report also included Aristoi Classical Academy, a K-12 school, that is planning to implement a Cypress campus at 12332 Perry Road, Houston. Additionally, the School of Science and Technology – Spring, is planning to permanently locate at 2105 Louetta Road, Spring. The school is temporarily located on Theiss Mail Route Road; however, once relocated, it is planned to accommodate 600 students in kindergarten to eighth grade, according to the report.

Silhavy said charter schools have only recently begun to branch out from their origins in southwest Houston ISD and are now entering into more suburban school districts in addition to changing their targeted student enrollments.

“They’re not focusing on the impoverished pockets of the city like they used to,” Silhavy said. “Some still are focusing on socio-economics, but not all of them.”