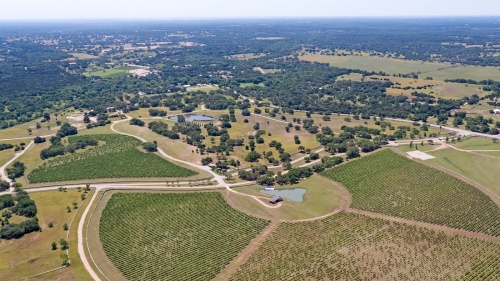 Officials from Driftwood Golf and Ranch Club have said the business' golf course should open in Dripping Springs' ETJ in 2020.

As the population of Dripping Springs and communities along Hwy. 290 expand, the city’s large extraterritorial jurisdiction, or ETJ—an external territory where a city government can exert limited powers—is accommodating growth. Development in the ETJ, however, can be complicated.

“Development in any city’s extraterritorial jurisdiction is a challenge, but particularly in our city’s ETJ due to the sheer size of the area,” Dripping Springs Mayor Todd Purcell said in a statement to Community Impact Newspaper.

In the city proper, Dripping Springs staff have more regulatory power and are able to enforce zoning and city lighting ordinances, for example. In the ETJ, the city only has oversight of property subdivision, signage, water-quality and city site-development ordinances, according to city Planning Director Jason Lutz.

In other instances, the city and developers wrestle over what is allowed, such as in the much-publicized case of Black Ranch, the Driftwood wedding venue development backed by Mark Black, of the Terry Black’s Barbecue family. After a nearly two-year saga that has brought the city, the developer and neighbors in conflict, the development is moving forward.

The history of the ETJ

Dripping Springs’ ETJ is unusually large compared to other cities’ in Central Texas, with over four times the area of the city. In contrast, Austin’s ETJ is smaller than Austin city proper.

“I am proud of the fact [that] the overwhelming majority of the property located in our ETJ is there by choice—property owners chose to annex into our ETJ,” Purcell said.

The result was the creation of a massive ETJ, with some gaps in the map where landowners chose to remain unincorporated. According to the city, many of those gaps are filling in as the city limits expand through annexation and the baseline half-mile radius of ETJ does, too.

The 1980s deal allowed the small city of Dripping Springs—which encompassed less than 2,000 residents in the 2010 census—to grow its influence, but it also left a small city staff to address development in the much larger ETJ, home to over 30,000 residents, according to city documents.

Those residents sometimes take issue with development on neighboring land, but the city has little ability to block any particular variety of development, with no power over zoning outside the city limits. For instance, the city had little room to respond to complaints from Driftwood residents who neighbor Black Ranch.

ETJ developments—such as Black Ranch—are subject to fewer city regulations and free of architectural controls, according to Lutz. At times, that makes coordinating with developers more complicated, as evidenced by Mark Black’s presence at an Oct. 8 Dripping Springs City Council meeting to seek a refund of over $12,800 in fees, most of which he said he paid under protest.

Since City Council voted to issue Black’s permit in March 2018, numerous complications have played out before council. In June of this year, the city issued a stop work order after groundwork on Black’s development showed diversions from the site permit. Black had to resubmit plans in order to reconvene construction.

Black Ranch was shrouded in controversy from the start. In 2017, Black filed a site plan application with the city of Dripping Springs for a 300-person wedding venue at 130 W. Concord Circle, Driftwood, a 64-acre property owned by the Blacks. To Black, Driftwood seemed like an ideal spot for a wedding venue.

“The area itself is kind of like the beginning of the Hill Country, where all the natural beauty starts to show,” Black told Community Impact Newspaper.

But some neighbors felt concern about the capacity of FM 1826 to handle traffic from Black Ranch, and environmental groups fretted that the venue, located in the Edwards Aquifer Recharge Zone, would negatively affect groundwater.

For instance, local environmental advocacy group The Friendship Alliance supported a neighborhood complaint about the development to the United States Fish & Wildlife Service regarding the presence of the endangered golden-cheeked warbler on Black’s property, and criticized Black for allowing runoff into a nearby creek—which resulted in sanctions from the Texas Commission on Environmental Quality earlier this year.

“Two times Mark Black has polluted the creek,” Carlos Torres-Verdin, president of The Friendship Alliance and Black Ranch neighbor, told Community Impact Newspaper. “We are at the mercy of a developer who doesn’t care about the neighborhood, and he is abetted by the rules of the ETJ.”

The conflict came to a head this spring, when neighbors observed that groundwork for the project did not match up with permitted site plans, which ultimately led to the stop work order.

Lutz said such an event in and of itself is not uncommon; the city issues stop work orders “once or twice per month.”

What caused the stop work order in Black Ranch’s case, according to Lutz, was not the nature of the work being done, but the developer’s failure to alert the city that plans had changed.

“It is the responsibility of the developer to notify the city of any changes,” Lutz said.

Moving forward, the city has other developments to contend with—likely new projects yet to come, and others currently in the works, such as the Driftwood Golf and Ranch Club off FM 150, which the project’s developer has said will open in 2020. A new elementary school is planned for annexed land on Darden Hill Road, according to Dripping Springs ISD, and another potential school site has been arranged through land purchased from the Headwaters development.

With a new census next year, the population of Dripping Springs could have significance to the ETJ. If the city’s population has grown to 5,000 or more, the ETJ will grow in areas by another half mile, based on Texas state ordinance.

As for Black, he has since resubmitted plans, and the city has permitted work to recommence, but his fight with the city over details and fees associated with the project continues. At the Oct. 8 council meeting, Black’s attorney, Kenneth Chaiken, argued that the over $12,800 in fees were costs reaped by the city in the course of “drama [the city has] incurred and [its] staff has occurred on a regular basis” by responding to the interventionist tactics of opposition groups.

Assistant City Attorney Laura Mueller said the fees should be considered “to the benefit of a property owner,” but Purcell encouraged council to wait for clarification on the fees from City Engineer Chad Gilpin before deciding. Council voted to postpone the issue until a Nov. 12 meeting.

Torres-Verdin is not satisfied either, and has said he and other neighbors are considering how to act next. Meanwhile, Black said he expects construction on the project to ramp up quickly, but otherwise remains tight-lipped, saying he anticipates being “involved in litigation” with the city.

As to whether he thought his development would be uncomplicated moving forward, Black said, “We’ve hit so much red tape, I wouldn’t be surprised by anything.”