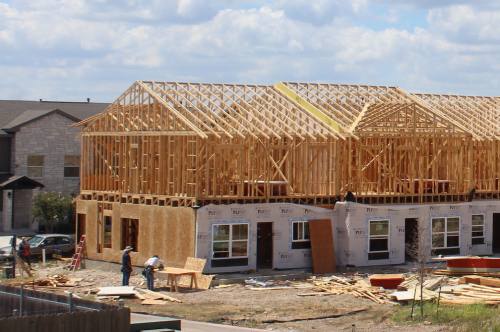 Workers build homes in Leander in this October 2019 photo. Texas cities are updating their architectural regulations and processes after two laws were approved in the most recent legislative session.

One law, House Bill 2439, prevents governments from enforcing building material standards that are stricter than what is outlined in the national model code. The other, HB 3167, establishes time limits for cities to respond to certain development plats and plans. The laws went into effect Sept. 1.

Prior to the passage of HB 2439, Leander required developments to meet certain aesthetic standards. For example, some commercial and residential properties were required to have 85% masonry. The city defines masonry as stone, brick and stucco, according to Planning Director Robin Griffin. Masonry is more expensive than other materials such as lap siding but looks newer longer.

“[Lap siding] you replace and paint,” Griffin said. “[With] masonry, you usually don’t have to do that.”

In response to the law, Leander City Council adopted amendments in August to the city’s composite zoning ordinance to incentivize masonry rather than require it. Some incentives include enabling apartments to have higher density, reducing tree requirements and allowing buildings to be closer to a street if they have more masonry.

Griffin said she thinks the legislation change will affect commercial development more than residential development in Leander, since homebuilders may be incentivized to use masonry already.

“I think it’s harder to sell a home that doesn’t look nice,” Griffin said. “I think commercial, they’re more likely to focus on the front and not worry about the maintenance on the sides.”

Previously, Cedar Park’s Code of Ordinances restricted or limited the use of certain materials on the outside of a building, such as vinyl, plastic and wood, according to Director of Community Affairs Fran Irwin. The new bill now prohibits the city’s ability to limit the use of building materials if the material is approved by a national model code.

When pursuing a project, developers must submit certain plats and plans for city approval. HB 3167 requires cities to respond in 30 days. The city has 15 days to take action on resubmittals. If action is not taken by the city within 30 days, the plat or plan is automatically approved.

“That’s a really big deal,” Griffin said. “We don’t want to miss that and have something approved that doesn’t comply with [Leander’s zoning] ordinance.”

Leander city spokesperson Mike Neu said the intent of the bill was likely to speed up the development process in cities across the state. In Leander, though, the bill has made the city less flexible in what plans it can accept, he said.

“In order for us to meet these deadlines, we’ll need more complete plans up front,” Neu said.

The standard process requires planning and zoning to approve, conditionally approve or disapprove applications within 30 days. In Cedar Park, the alternative process allows applicants to choose the same review process they were used to before HB 3167, according to Irwin. In Leander, the alternative approval process gives applicants a chance to resolve comments from city staff throughout the process, according to Griffin.

Griffin said it is difficult to tell how much of an effect these two bills will have on Leander since the bills recently went into effect.

The bills, especially HB 2439, have garnered various reactions. A petition asking Gov. Greg Abbott to reject the bill had more than 900 signatures in June.

“I think in my personal opinion that we’re probably going to see more legislation in response to [HB 2439],” Griffin said. “I feel like this will probably change again in the future.”