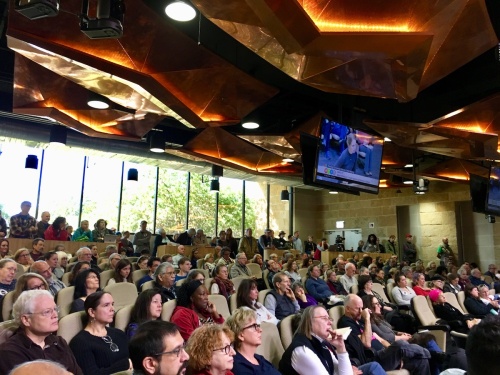 Austinites packed into City Hall Saturday, Oct. 26, to provide public testimony on the latest draft of the city's land-development code.

Hundreds of Austinites spent their Saturday at City Hall to tell the city’s volunteer planning commissioners what they thought about the proposed revision to Austin’s rules governing how city land is used. The testimony highlighted the continued gaps between competing visions for the future of Austin’s land use and housing landscape.

The community effort to rewrite Austin’s land-development code has been ongoing and polarizing since 2012. The impact of Austin’s explosive growth on land demand, housing affordability and availability sparked the decision to rewrite the land code, which has not seen any significant revisions since 1984.

City staff released the latest proposal for the land code rewrite, which included updated zoning maps and a revised code text, on Oct. 4. The release marked the fourth such draft since 2017. According to numbers provided by city staff, the new code creates room for 397,000 new housing units—up from 145,000—and roughly 9,000 new, incentivized income-restricted units—up from 1,500. The proposed zoning maps allow for the denser development of apartments and missing middle housing—which offers between two and eight units on a single lot—in high-opportunity areas, such as in and around neighborhoods along busy transit corridors. Roughly 80% of new housing capacity is proposed to be in these locations.

Roughly 230 people signed up to provide the 13-member, City Council-appointed Planning Commission with three minutes of input each on the changes proposed by the 1,366-page code document. The testimony reflected much of what has galvanized the public since the project to rewrite the code began.

The testimony mostly fell into two schools of thought: those who want to protect the existing physical character of Austin’s single-family-dominated neighborhoods, and those who support denser housing development across the city to mitigate the growing demand for housing and the city’s rising affordability crisis.

Michael Nahas, a local economist and University of Texas graduate, said Austin’s housing market is impacted heavily by supply and demand economics and in order to meet growing demand, the city needed to make it easier to build more housing throughout the city. He urged the city to adopt a land code that made room for more housing units.

“The problems we’re hearing about with displacement and [rising home prices] are problems that are happening now, with the current code,” Whitworth said. “The only way to solve these things is a new code.”

Many speakers who objected the proposal expressed fear that their homes would be taken away if the city rezoned their neighborhoods to allow for denser housing development. Some speakers called it “backdoor eminent domain.”

Homeowners on Saturday worried aloud about unaffordable property tax increases on their homes if their properties were rezoned to allow for more units. However, the Texas tax code, Chapter 23.01 section D, says a property’s market value—the value on which a property is taxed—can only be based on what is on the property, not the property’s development potential.

Sharon Blythe, the North Austin resident who is leading the Our Town Austin PAC petitioning for the recall of Austin Mayor Steve Adler and five City Council members, said the city should be “ashamed of themselves” for the proposal, which she said takes away property rights.

Other speakers in support of the proposed code revision said the need for the city to build more dense housing in the center of the city is an environmental sustainability issue. They said current land demand shows more housing is needed, but the city needs to ensure new housing is not built on green fields in the outskirts of the city. They also argued denser development allows for a more walkable city and gets people out of cars, which helps with traffic congestion and carbon emissions.

The new code proposes removing on-site parking minimums around transit corridors and regional centers. Residents worried that less on-site parking would result in more people parking along neighborhood streets, most of which are missing significant portions of their sidewalk infrastructure. The combination of missing sidewalks and car-lined curbs, they argued, would force pedestrians into the street, creating a safety hazard.