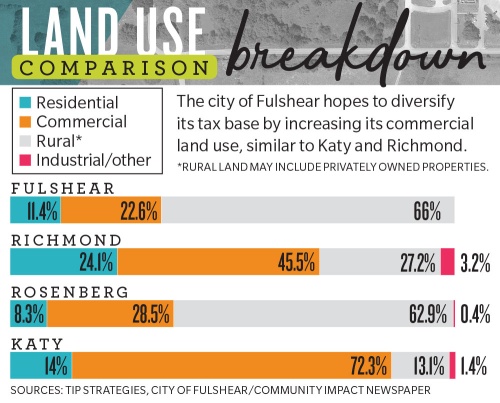 Fulshear Floral Design owner Ace Berry said the area surrounding his home was all cow pastures eight years ago when he decided to move to Fulshear.

“Now if you look at the development near FM 1463 and FM 1093, all you see is all these retail and fast-food places popping up everywhere,” he said.

To help manage its rapid growth, the city of Fulshear has been working with different entities to create its establishment of its first citywide economic development strategic plan.

“In order to reach a destination, you need a map,” said Don McCoy, president of the Fulshear-Katy Area Chamber of Commerce. “Fulshear needs a map to reach its economic goals that work to improve the quality of life in our community.”

Hired in November 2018 by the city, TIP Strategies Inc. presented a 10-year economic plan at the July 30 City Council meeting and identified key threats to the city’s prosperity, including a lack of a diversified economy. The firm recommended updating zoning and enhancing public spaces.

“We’ve got a little bit of time as far as how we make this crossover work,” Fulshear Mayor Aaron Groff said. “We’ve got all kinds of options in front of us, so I don’t want us to get stuck on that and not adopt the vision and the goals that are set forth in the strategic plan.”

Fulshear’s population has doubled since 2015, and demographics firm Population and Survey Analysts estimates by 2030 it will have 30,000 residents in its city limits.

City leaders said they want to diversify the city’s tax base to prevent Fulshear from becoming a bedroom community, or a place where residents commute to a nearby city for work.

“I don’t know that we are truly a bedroom community per se because we have been a rural city, but if we don’t manage, we will become one,” Groff said.

The city of Fulshear’s zoning map shows 89% of land is residential or rural residential, while 4% of land is represented by the downtown district around the historic core. About 6% of the land is for commercial uses along FM 1093.

TIP consultants said tax base diversification is crucial for a city’s economic development because it ensures the community does not solely depend on a few industries or sources of income.

McCoy said he believes Fulshear’s tax base is missing commercial entities, such as job-creating companies akin to data centers or light manufacturing, in Fulshear’s extraterritorial jurisdiction along I-10.

“We can have a great mix of commercial, residential, countryside, quaint downtown and retail all in their own respective areas and not far from each other,” he said.

Berry said he watched projected growth patterns in Houston and Katy before deciding where to best place his business. He noticed growth was expanding west and settled on opening his floral shop in downtown Fulshear.

“I knew since there were subdivisions coming into this area, my business would flourish because of that,” he said. “Fulshear has the potential to be a charming, very cute little town that people want to come visit, but it has to be pushed in the right direction.”

Other residents said they agree with Berry on Fulshear’s future. The Houston-Galveston Area Council’s Livable Centers Program found locals want more unique shops and restaurants, a town center, more public gathering spaces, a walkable main street and for downtown to be a destination while keeping its small-town charm.

“We can allow the growth to dictate who we become as a city, or we can manage the growth and become the city our residents want us to become,” Groff said.

Recommendations include reducing the effect of traffic growth on Main Street, providing more bicycle and pedestrian accommodations, adding parks, and incorporating the appropriate amount of density of residential and commercial developments to match existing historical structures.

At the Sept. 17 meeting, Fulshear’s economic development corporations as well as council unanimously voted to approve the vision, guiding principles and goals set out in the economic strategic plan but postponed adopting the implementation plans.

The plan’s mission statement emphasizes building a community that is sustainable for future generations while maintaining the small-town charm and providing opportunities for the fast-growing population and employment.

“The [plan] does not dictate future land use, but rather provides frameworks for proactively leveraging municipal tools to achieve the balance of development outlined to fulfill the community’s vision for Fulshear,” Fulshear Economic Development Director Angela Fritz said.

Fritz added the city will continue to work with landowners and developers to build relationships that can assist in achieving the community’s vision as laid out in the economic plan.

TIP consultant Caroline Alexander said business recruitment will come to Fulshear once the city has shovel-ready sites and the amenities to attract companies.

“Through your business retention expansion program and the transformative projects, all of that is putting in place a strong system,” Alexander told City Council members at the Sept. 17 meeting. “When the time is right, and you have an inventory of sites, you can be really aggressively marketing, then you can take those steps.”