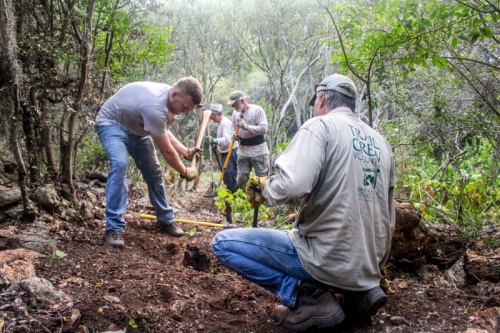 Once every week, the San Marcos Greenbelt Alliance Trail Crew meets in the morning to work on projects to improve existing trails around the city. About 15 members of the crew worked on the North LBJ Trail on Sept. 12.

The San Marcos Greenbelt Alliance has grown since its humble beginnings in 1998, when a group of neighbors and friends got together to protect green space near their homes.

Sherwood Bishop, one of the founders of the organization, said one of the group’s missions has been to surround San Marcos in a halo of greenery—park space that could be made into trails and nature that people from in and out of town can enjoy.

“I’m not sure if it was because we were naive,” Bishop said. “It was really kind of crazy.”

Through working with local developers, elected officials and other nonprofits that shared and contributed to its vision—organizations such as the San Marcos River Foundation—the Greenbelt Alliance is close to achieving that goal.

“We only have a few pieces left,” Bishop said. “We never use or support eminent domain; it’s only voluntary.”

The alliance has kept up with its original vision, along with some efforts that have been around since the beginning, such as the trail crew that meets weekly to work on projects.

Diane Phalen, a board member, said the group’s responsibilities have grown along with its membership and number of volunteers.

The Greenbelt Alliance hosts community activities, such as bird watching and bug walks. It also participates in efforts to remove invasive species and restore grassland.

Recently, the organization has also been taking on construction projects to improve the city’s existing trails. The nonprofit also added maps along the city’s trails that can synchronize with smartphones.

As caretakers of the trails and the parkland around the city that it has helped secure, Phalen said the organization ultimately contributes to bringing more people to the city while also protecting the environment.

Though the alliance’s original vision of finishing its loop of green space around the city is almost complete, Bishop said the organization will continue fighting to create and preserve other greenbelts in San Marcos.

And the nonprofit will also continue pursuing big goals, such as the plan to connect the planned Emerald Crown Trail to Austin’s Violet Crown Trail.

“We’ve had so much success, and I say we—not just the Greenbelt Alliance, but the city of San Marcos and the community in general—developing more and more of these green spaces and building trails in them, connecting them to more and more different parts of town,” Bishop said.