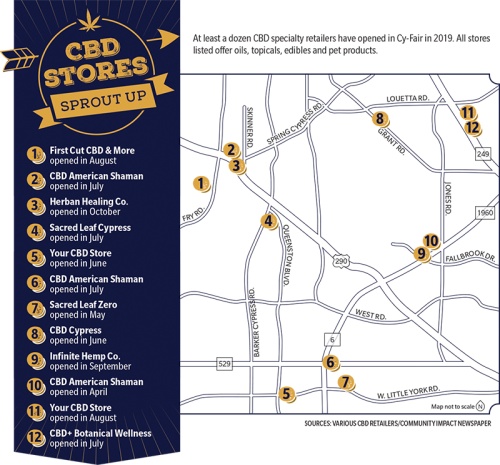 At least a dozen retailers have opened their doors in 2019 in Cy-Fair, offering products containing cannabidiol as state lawmakers revised CBD regulations during the 86th Texas Legislature this year.

The hemp extract comes in many forms including tinctures—a liquid form—edibles and topicals, or products that can be applied directly to the skin, such as lotions and ointments. Local business owners claim the products could help consumers alleviate a wide range of symptoms, including chronic pain, stress, insomnia, autism, epilepsy, inflammation, autoimmune diseases and digestion.

“Folks are still confused about how CBD can help with all these things. I always tell them [CBD reactivates] those receptors within your body,” Sacred Leaf Cypress co-owner Marie Fraga said, adding that CBD can help stabilize the body’s internal systems.

Medical experts said while they have seen some patients experience success with CBD, some skepticism and a lack of sufficient research remain.

A separate bill signed in June, HB 3703, made medical-use cannabis for patients with certain medical conditions more accessible. But physicians still have strict limitations when it comes to prescribing CBD. Experts in the medical industry said while some patients have had success with these products, affordability is hindering others from trying them.

Industry leaders said they are hopeful the action taken during the 86th legislative session will lead to increased access to CBD and the revision of marijuana restrictions in the future, but local legislators said they are waiting to see the outcomes of HB 1325 before making any other decisions about these regulations.

“The proliferation of CBD stores is a likely outcome with the approval for use of CBD oil and hemp products in Texas, given its notoriety and explosive growth across the nation,” said state Rep. Sam Harless, R-Spring. “As with any emerging market, I think that growth is to be expected.”

Linda Paar said she tried Sacred Leaf products when the medications prescribed by her doctors were causing severe side effects. She claims she started noticing a difference in her body and stopped taking doctor-prescribed medications altogether within a few months.

She and her sister Marie Fraga opened Sacred Leaf Cypress on Barker Cypress Road this summer with the goal of helping others find natural alternatives to pharmaceuticals and opioids.

“I got into it because it helped me, and I want to help other customers feel better without the side effects of all the [medications] that doctors are prescribing,” Paar said. “I got tired of it, so I’m sure other people are tired of that too.”

At Herban Healing Co., an in-store education center explains the science behind CBD and lets customers know how it might affect their bodies. Cy-Fair natives Jennifer and Kyle Williams opened the store in early October with a “seed to shelf” approach. Each step of production is based in California, where they grow their own hemp, extract their own CBD and have products tested at third-party labs.

Throughout the process, each product has three certificates of analysis—official lab documents that report the levels of THC and other cannabinoids present. No matter where customers are purchasing CBD products, the brother-sister duo said they should always ask to see its certificates to ensure the product’s quality.

“Unless you have a product that you’ve seen the certifications for that say ‘zero THC,’ there’s no guarantee that it doesn’t have a trace of it and it won’t show up on your drug screen,” she said.

Dr. Paul Van Ness is the director of Baylor St. Luke’s Comprehensive Epilepsy Center and one of 15 physicians statewide authorized to prescribe low-THC cannabis. According to state regulations, medical-use CBD is cultivated from the marijuana plant and can contain up to 0.5% THC, while commercial-use CBD is derived from the hemp plant and can contain no more than 0.3% THC.

HB 3703 expanded the list of conditions for which approved physicians can prescribe low-THC cannabis to include epilepsy and other seizure disorders, multiple sclerosis, autism, terminal cancer and incurable neurodegenerative diseases, among other diseases.

“After that happened, I started getting calls … which made me a little uncomfortable because these other conditions have not really been studied with CBD in a way we have a large number of patients, and we know what the risks and benefits are,” Van Ness said. “So I have to look into each case in quite a bit of detail to determine if it’s really worth doing it.”

In June 2018, the U.S. Food and Drug Administration approved its first drug containing purified drug substance derived from marijuana, the Epidiolex oral solution. Before that, Van Ness said patients would pay $150 for a bottle of CBD over the internet, but these lower dosages were not as effective.

In most cases, insurance would only cover the Epidiolex prescription if patients were diagnosed with Lennox-Gastaut syndrome or Dravet syndrome—severe seizure disorders—Van Ness said.

Product prices in retail shops vary based on the amount and strength of CBD, but CBD American Shaman owner Tommy Gonzales said he considers it to be affordable compared to prescription drugs. For instance, a one-month supply of water-soluble CBD oil costs about $60 in his Cy-Fair stores, he said.

For seizure patients who could afford to try medical CBD, Van Ness said some had success and others experienced unwanted side effects. According to the FDA, Epidiolex patients in the clinical trials had side effects such as sleepiness, lethargy, fatigue and weakness, insomnia and poor sleep, elevated liver enzymes, decreased appetite, diarrhea, rash and infections.

Van Ness said he is hesitant when it comes to certain popular products, including edibles and topicals such as skin creams, and would like to see more research conducted.

“All of that has probably not been studied, and they’re in products that are not regulated by the FDA,” he said. “So in Texas, now that CBD is legal, they can all do this legally. It’s hard to know if those other uses will pan out. It’s a fad right now, and like all fads, after a few years we’ll find out what really happens.”

Store owners agreed they would like to see future legislation passed to cover more patients and increase access to all CBD users.

Gonzales, who already owns two CBD American Shaman stores in Cy-Fair and has plans to open two more in the area, said he expects the market for CBD products to eventually reach saturation. But he said he believes CBD will continue to gain traction as more people learn about it.

“It’s kind of like a bubble—it’s definitely going to keep growing and eventually it will bust and it will be oversaturated,” Gonzales said. “The prices will drop like any market—especially when the FDA comes out and says ‘Hey, it’s good.’”

The relaxing of CBD regulations in Texas has some officials and business owners thinking about how other laws could be changed in the future. Gonzales said he expects the federal government to legalize recreational marijuana eventually and has plans to open a dispensary in Cypress when that happens.

Harless said he supported HB 1325 specifically because of the distinctions made between hemp and marijuana and the amount of THC present in products—and because of the production stipulations laid out in the bill.

Federal changes could prompt state leaders in Texas to act on marijuana regulation, said Katharine Neil Harris, research fellow from Rice University’s Baker Institute for Public Policy. However, she said legalization is not likely to take place anytime soon based on the state’s political climate.

“If we see change at the federal level that liberalizes some of the laws that we have now, I think that that would incentivize a change in the state,” she said. “It’s certainly not going to happen in the next—I would say next three sessions, I don’t think it’s going to happen.”

Harris said the Harris County District Attorney’s Office has already taken steps to decriminalize misdemeanor marijuana, emphasizing that decriminalization is not the same as legalization. The Misdemeanor Marijuana Diversion Program allows those caught with 4 ounces or less to avoid arrest, jail booking and criminal charge filings by taking a four-hour decision-making course.

When the program was announced in March 2017, district attorney office officials said more than 100,000 individuals had been prosecuted for misdemeanor possession of marijuana in the preceding decade, which produced “no public safety benefit.”

Kyle Williams said he is hopeful the progress made in the state’s CBD regulations this year bodes well for the legalization of recreational marijuana in the near future.

“Texas can only watch other [states] make all this tax revenue and not capitalize on it,” he said. “We’re only going to sit back for I think two years. It could be four, but I think it’ll be two years and it’ll be legal.”

Andy Li and Hannah Zedaker contributed to this report.