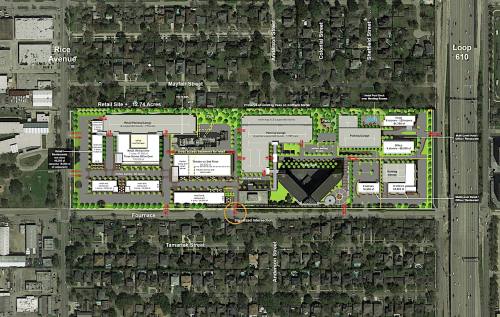 In a revised plan presented to Bellaire's Planning & Zoning Commission on Oct. 27, the developer removed multifamily but added a hotel.

The plans reduced the maximum height from the previously requested 85 feet to 65 feet and removed the proposed multifamily development on the western side of the property.

Updated plans for the eastern portion of the property could include a hotel rising up to 84 feet, which would also require P&Z approval, but SLS does not yet own that land, SLS owner Danny Sheehan said.

The majority of the property plans show the space being used for retail, restaurants, office space and parking garages, according to the the revised master plan.

“The demographics in Bellaire are great,” Sheena said at the workshop. “If we get restaurants that are out here, we have people in Bellaire that can afford to go to nice places. … There’s a lot of people who want to be here and want a nice development, but they’re always asking if there’s going to be enough destination tenants to support it.”

The revisions followed the commission’s Oct. 10 meeting in which city staff said they did not recommend approval for specific use permits for the maximum height allowances or the construction of a multifamily structure in large part due to concerns that those requests did not conform with the city’s comprehensive plan as it relates to corridor mixed-use properties.

The proposed project, located in north Bellaire at 4800 Fournace Place and 5901 S. Rice Ave., will be discussed at another workshop the week of Oct. 28. A new draft of the proposed development is expected to be released by Nov. 5, followed by another public hearing the week of Nov. 18.

A vote by the commission is expected at its Dec. 12 meeting.