Pearland to receive federal funds for Harvey recovery through grants 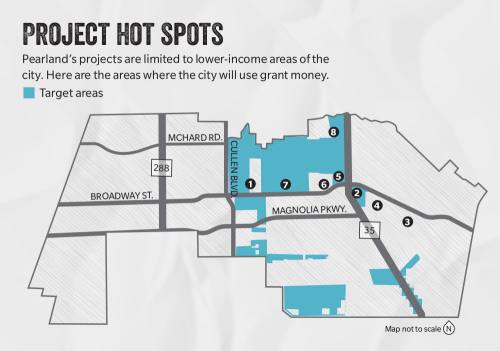 Although Hurricane Harvey occurred over two years ago, cities are still trying to recover from the storm. The city of Pearland submitted applications for the Community Development Block Grant, or CDBG. The funds would address buyout and infrastructure needs post-Harvey.

Pearland received $429,719 in an application for a yearly grant to address the needs of the underprivileged in the city, allowing the city to begin using those funds in October. Pearland chose to send in two applications on Aug. 30 for money allocated to disaster relief, specifically damage caused by Harvey. One grant was for buyouts, and the other was for infrastructure needs in the city. The city has yet to hear back on those applications, said Joel Hardy, the grants and special projects administrator for the city of Pearland.

While applications were open to certain jurisdictions affected by Harvey last year, Pearland wanted to make sure its applications coincided with other funding source for Harvey relief, Hardy said.

“All of this money should be delivered based on an emergency. … It is a conflict that these funds are coming out slowly,” Hardy said. “The public expects these funds to come out quickly, and that is not how this works.”

The city applied for different grants to address Harvey damage, including a grant from the Texas Water Board. Some projects, such as fixing Mimosa Acres drainage, will be taken care of through the help of several funding sources, including grants and the 2018 bond, Hardy said.

For the disaster recovery CDBG, the city has applied for $2.7 million  for infrastructure and $2.6 million for buyouts. The infrastructure changes would happen in a large portion of the city between Cullen Boulevard and Hwy. 35 and north of Broadway Street and would include smaller drainage mitigation projects, with other state and local funds allocated towards other parts of the city in need, Hardy said.

While the city has not decided what would be bought out, Hardy estimates the money could be used to purchase 10 properties.

For federally funded grants such as CDBG, projects must meet a 70% low- to moderate-income requirement, meaning 70% of allocated funding must go to a majority low- to moderate-income area.  In Pearland, it is hard to meet this requirement, as the city has small pockets of underprivileged residents, and vital projects are not necessarily in areas with a large underprivileged population, Hardy said. The 30% percent of the funds that do not need to be allocated to a LMI area will be directed to drainage improvements in Mimosa Acres.

After Hurricane Harvey, the state modified the LMI percentage for some cities and counties: Cities badly affected by the storm but with a relatively small economically disadvantaged population may still receive disaster recovery funds.

This year, the U.S. Department of Housing and Urban Development has also issued a new grant for mitigation that focuses on protecting cities from the next storm rather than focusing solely on recovery. The city plans to apply for funding from this grant as well.

“We’re always worried about what the next event is going to do to these structures we have repaired. If they just get destroyed, it’s a waste of the taxpayers’ money, and we don’t want to do that,” Hardy said.