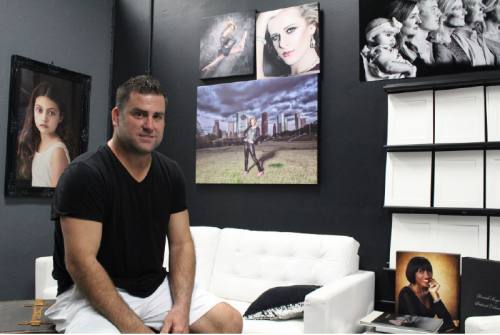 Derrick Bryant opened his studio on Timberloch Place in 2018. Photographer Derrick Bryant knew at a young age that he wanted to be an artist. Years later, he does it full time.

Bryant said he got started in art when he was 5 years old by sketching cartoons. As he got older and his skills improved, he shifted his focus into realism and portraits.

“I liked to capture as much detail as possible,” he said. “When I started doing that, I picked up a camera and started learning the basics.”

After experimenting, learning more about photography and building a client base around The Woodlands area, Bryant opened a studio under his brand, Derrick Bryant Photography, in April 2018.

Starting with a bang

Bryant said July 4, 2010, was when his career in photography really got started.

“At the time, [I] lived in Grogan’s Mill, and I walked up to the [Woodlands] Waterway and shot the fireworks,” he said. “I sent a picture into The Woodlands Visitors Bureau ... and they reached out to me about using a couple of pictures. One of the firework photos kind of went viral, and it went everywhere. That put me on the map at the time.”

From there, Bryant started shooting for The Woodlands Township and became more involved in the community before he launched his business in his garage.

“It’s crazy looking back on it,” Bryant said. “I started in a two-car garage with no air conditioning. It was what I had at the time, and I did it for a year to a year and a half. I would get professionals that would contact me ... and I felt I needed a place.”

Bryant’s business went through several iterations before opening the studio on Timberloch Place, including moving into a living room, then into a new house with a media room.

While operating out of his home, Bryant received second place for Best of The Woodlands in 2017 and first place in 2018. The increasing number of clients meant he needed a bigger space, however, and Bryant said he knew the first time he stepped into the space that occupies his studio now was where he was meant to be.

“I will never forget where I came from,” Bryant said. “It was a huge relief to get this place.”

As a photographer, Bryant said his favorite part of the job is seeing how others can have their confidence boosted from a photo shoot.

“Photography is definitely an art, and it’s unlimited,” Bryant said. “It’s also lifting people up. I can already tell if somebody does not like having their picture taken. ... By the time they leave here and see the pictures, it builds their confidence up.”

Bryant said seeing people light up when he finishes pictures means just as much  as opening his studio did, in terms of achieving a goal.

While he started with event photography, Bryant’s areas of focus have expanded to include professional headshots, senior-year pictures and athletic action photography. The studio allows for hair and makeup and photo editing to be done on-site.

“I want people leaving feeling like they went to Hollywood,” Bryant said. “I want them thinking, ‘That guy told me how to stand to bring out the best in me.’”