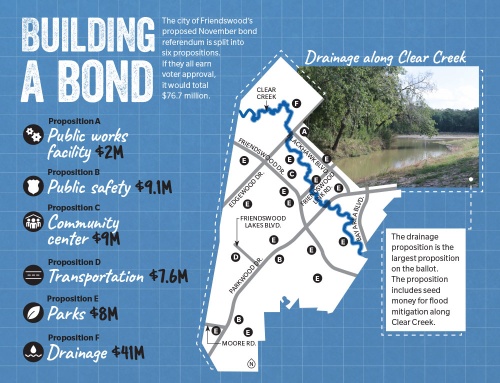 Updated Oct. 18, 3:06 p.m.
Editor's note: Information stating that the city of Friendswood adopted a rollback tax rate this year in anticipation of the bond election in November has been removed from this story. A print correction will run in the November issue of Community Impact Newspaper.

In November, Friendswood citizens will vote on the largest bond in the city’s history at a total of $76.7 million.

The bond includes money for capital improvement projects as well as seed money for Clear Creek flood mitigation efforts, or money to entice other governing entities to help pay for the projects.

The bond has six propositions: drainage, transportation, a public works facility, a public safety building, a community center and parks. The propositions were split up due to a state law, city staff said.

The drainage proposition, the largest proposition on the ballot, will include buyouts, City Manager Morad Kabiri said. This is leaving some residents hesitant to support the proposition until they know whether they will get bought out.

“Who could support something that is so up in the air,” resident Cheryl Johnson said.

Friendswood City Council broke the projects into several propositions so voters could choose the biggest priorities to them, council members said.

Because the drainage bond is so large and so needed in the city, citizens may opt for only voting for the drainage proposition, council members said.

The projects were proposed by a citizens advisory team, or CAT, with guidance from city staff. The CAT has since been disbanded. Some of the projects, particularly Friendswood Lakes Boulevard, were guided by staff.

All of the projects must be in a bond, rather than paid for through the city’s general fund, Kabiri said in a written statement. This also allows more users of the final products to pay into them, Kabiri said.

“Bonds provide a mechanism for those big-ticket items to be completed,” Kabiri said.

The last bond the city of Friendswood put forward to voters was in 2013 and totaled $24 million. The drainage proposition on the 2019 bond totals $41 million alone.

“This is a huge leap for the citizens of Friendswood. I think that will be shocking to our citizens,” Council Member Sally Branson said.

The council ultimately decided on the $41 million number unanimously. The entire proposition will require financial support from other governing bodies, which could potentially include the Harris County Flood Control District, Galveston County Consolidated Drainage District and the Army Corps of Engineers. Some council members were hesitant to agree on a number, as the amount could not pay for the entirety of the drainage projects regardless.

However, the amount of seed money the city can offer would improve its chances of getting help from other entities, said Ron Lovely, a member of the former CAT.

The drainage work would total closer to $173 million to get completed, more than the entirety of the city’s bond and the city’s fiscal year 2019-20 budget combined. The projects for the bond include terracing and de-snagging along the  creek.

The $41 million  takes into account inflation and an amount for buyouts, with the city planning to contribute 30% of the total cost for drainage projects, city officials and council members said.

The city anticipates needing to buy out 60 properties around the creek.  After Tropical Storm Allison, the city bought out 136 homes. The city was awarded federal grant money to buy out 26 properties this year. While the city has seed money for buyouts, officials do not anticipate having enough money to conduct buyouts alone.

“The $41 million that is in the bond proposition is insufficient. It only represents seed money in the projects. We will have local partners,” Kabiri said.

The buyouts would allow the city to use more land alongside of the creek for terracing and de-snagging. However, the city does not know what properties would have to be bought out and will not know prior to the election, as the terracing project will not be completed by that time, Kabiri said.

For Johnson, whose home is located along the creek, whether her family will be bought out is a factor in supporting the bond.

“I think that the city right now is nonspecific and I don’t vote for blank checks,” she said.

Buyouts can be conducted through federally funded programs, which the city has used in the past. If there are not applicable grants, then the city will have to go about fair market negotiations.

“Any and everything is a possibility,” Kabiri said.

When it come to fair market negotiations, there is less the city can know about what it has to pay, members of the former CAT said.

“In general, people don’t want to just give the government their houses,” Lovely said.

The fear of lacking money to complete projects along the creek is that not enough money or local partnership could stall the process of getting projects accomplished.

“The longer you wait, it doesn’t get better. If we don’t finish this project in total, you don’t get any of the benefits, former CAT member Gail Lovely said.

The drainage projects are estimated to take 15 years to complete, a longer timeline than any of the other propositions by a decade. In that time, several things could change, including council and its priorities, Council Member Trish Hanks said.

“A lot can change in 15 years—leadership at the council level, at the state level, at the federal level, bond rates, taxable value,” Hanks said.

The bond could raise the tax rate an estimated $0.05 to $0.10, city staff said. However, once bonds are no longer being sold, the rate would decrease over time, Kabiri said in a written statement.

Council decided on the tax rate for the upcoming fiscal year Oct. 7. The rate, $0.521439 cents, is greater than the effective rate, but less than the originally proposed rate of $0.5324. If the bond is approved by voters, the tax rate increases will depend on when the projects go out to bid.

“Voter approval of a bond proposition only authorizes funding for the project,” Kabiri said in a written statement. “Depending upon the type of project, the process from planning to construction may take a number of months.”