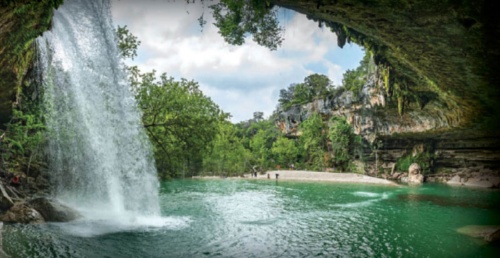 The Southwestern Travis County Groundwater Conservation Districts will appear on the Nov. 5 ballot for some Travis County voters.

The Trinity Aquifer is the sole source of water for thousands of domestic, commercial and ranching wells across the Hill Country and, according to geologist Juli Hennings, it is also one of the most stressed aquifers in the state of Texas.

While numerous conservation districts protect sections of the Trinity, the SWTCGCD would oversee the last unregulated pocket of the aquifer. If established through the election, the group can begin to assess and protect the health of its section of the aquifer by utilizing monitoring wells; establishing well-spacing requirements; preventing water contamination; and minimizing  excessive pumping through use, and consumption fees that would be placed on some of the district’s heaviest users.

The formation of a conservation district would be able to provide the community with a higher degree of groundwater standards as well as a better understanding of the resource, according to Brian Hunt, a senior hydrogeologist for the Barton Springs Edwards Aquifer Conservation District.

Groundwater conservation districts are established to protect the health of the state’s aquifers by monitoring water use, promoting conservation and educating the public about groundwater.

Information provided by the potential conservation district states it would manage a section of southwestern Travis County that has been the site of large developments and significant annual population growth. Since 2002, about 100 new wells have been constructed in the area annually, which Hennings said has led to increased use of groundwater.

Linda Kaye Rogers, president of the Hays Trinity Groundwater Conservation District, which shares SWTCGCD’s southern border, said the impacts of increased groundwater use in southwest Travis County have been felt in other areas of the Hill Country.

“The aquifer doesn’t know anything about that county line [that divides the conservation districts],” she said. “What happens up [in Travis County] has an impact on everybody down below because of how the aquifer flows. We’ve seen over the years increased pumping in that area is having a negative impact on our people.”

Rick Scadden, the SWTCGCD’s Bee Cave representative and president of the district’s board of directors, said a depleted groundwater supply has the potential to impact an entire community, even those individuals who rely on surface water. A severe drop in the Trinity’s water supply could negatively impact local property values, the ability to fight fires and the overall way of life in the Hill Country.

Hennings said the conservation district’s goal is to maintain a balance between protecting the rights of private landowners and the responsibility to protect the water supply for the future, emphasizing that groundwater is not an infinite resource.

While the district would research and evaluate groundwater use across its 215-square-mile area, it would be funded through fees only placed on around 85 of the more than 1,700 wells it would oversee, according to the district based on a 2016 Travis County study.

The study states these “nonexempt” wells—which represent about 5% of those in the district and are capable of pumping more than 10,000 gallons per day—account for an estimated 71% of the district’s groundwater consumption.

Based on legislation establishing the SWTCGCD, maximum fees for nonexempt wells could include a $1,000 new well construction fee; a $400 renewal fee; a $1,000 water utility connection fee; and a fee of $0.20 per 1,000 gallons used. Exact fees would be established by the district if confirmed in the election.

Though certain groundwater districts have the ability to implement taxes, the district’s Enabling Legislation prevents the SWTCGCD from doing so, according to Scadden.

“Groundwater districts help equalize the ability for people to have water,” Rogers said. “For most private wells, the district will have no authority over those, but any [non-exempt] wells will be in oversight and managed by the district.”

Although a large portion of residents within the district use surface water—including many in cities such as West Lake Hills—the formation of the SWTCGCD has gained the support of some local officials.

West Lake Hills Mayor Linda Anthony, who was originally skeptical of the district’s confirmation in May 2018 when it could have appeared on a ballot for the first time, said in August that her initial opposition may have been based on misconceptions about the district’s functions.

“The area defined by this district is the last pocket of unregulated groundwater in the southwestern area. It’s an area that is crying out for monitoring and management,” Anthony said Aug. 28.

For areas of southwestern Travis County that do rely on groundwater, protecting that resource is a large concern, according to Hamilton Pool Road resident Carrie Jones.

“We are concerned about the number of new subdivisions popping up and the need for more groundwater used to supply them,” Jones said, adding that she would like to see more regulation and enforcement across the state beyond a conservation district.

However, others in the community, including Bee Cave City Council Member Jon Cobb, believe conservation districts do little to actually save water. He said differences in regulations from district to district unfairly target certain property owners.

Cobb also said he believes conservation districts offer little protection for individual property owners. If a property owner disagrees with a fee being implemented on his or her land, Cobb said that resident would have little hope in defending themselves against an entity with more resources.

Although the district may not cover the entire aquifer, Hunt said different sections of the aquifer require different approaches to groundwater management. For example, the section of the Trinity Aquifer in southwestern Travis County has a slower recharge rate than the Trinity section within central Hays County, he said.

With the November election on the horizon, Rogers said she feels that those running the SWTCGCD are in a good position to implement useful regulations if the district gets confirmed by voters.

“It’ll take some time, and it’ll take some money [to get started], but the board knows what they need to do and how to do it,” she said.

As the election approaches, the SWTCGCD is emphasizing community outreach, according to Hennings. Board members have appeared before various city councils, Travis County Commissioners Court and at neighborhood events promoting the district.

“I really pray that people will understand that they need this district if they want to have water in another five to 10 years. If somebody doesn’t start managing it, it’s going to be gone,” Rogers said.
SHARE THIS STORY