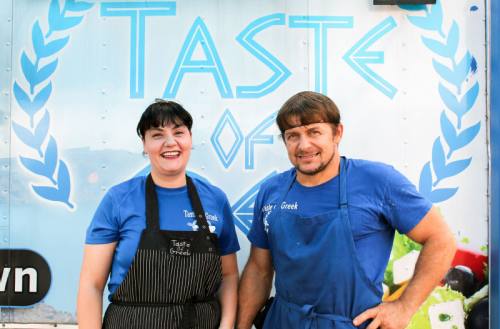 Owners Daniela (left) and Altin Mulla are transitioning their food truck, Taste of Greek, into a brick-and-mortar store.

Altin Mulla and his wife, Daniela, opened the Taste of Greek food truck in the Humble area in 2016, bringing the food of his native Athens, Greece, to the area. Now, the duo is taking their food from the streets into a brick-and-mortar storefront.

The truck, which relocated to its current spot on Northpark Drive in Kingwood in 2017, serves classic Greek dishes such as gyros, which are meat served in warm pita bread with tzatziki sauce, as well as dolmades, or grape leaves wrapped around rice, and the classic Greek dessert baklava. Altin said the care they put into their food creates a uniquely authentic taste.

“Everyone here can sell a gyro, but it’s how we prepare [the food] and the sauce,” Altin said. “The tzatziki sauce is a secret. We don’t buy the sauce from a supermarket; we make it.”

The food truck initially struggled, but Altin said it has since developed a strong community following.

“People, they love our food. The way we cook, the way we treat them,” Altin said. “We’re so happy.”

Daniela said one unique challenge has been making their food “too Greek” for American customers. For example, in Greece, chefs will typically put their fries inside a gyro, but she said most Americans want fries on the side.

But no matter how customers want to eat their food, Daniela said she and her husband make sure they feel at home.

“Because it’s only our family, that’s why we take care of the customer like they’re our own,” Daniela said. “It’s not [an employee] who’s working for us just for a paycheck.”

Altin announced Aug. 30 the truck would transition to a brick-and-mortar restaurant. He said he hopes to open the eatery, which will be located at 4526 Kingwood Drive, in early 2020.

“More people come, and they want more different food,” Altin said. “That’s why we decided to open the business building to have more food, different plates.”

When he does open the restaurant, Altin said he may keep the truck open, but he is more focused on making a smooth transition from the streets to his first storefront.