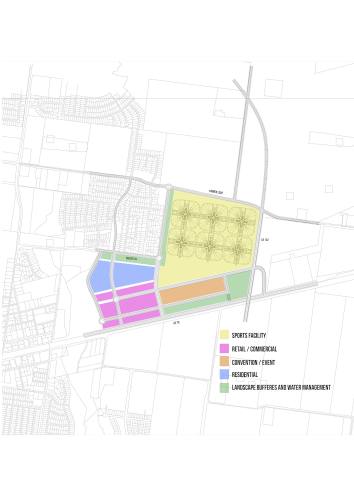 Two weeks after the projected construction start date, dirt is not yet turning on Hutto’s Perfect Game development. After a falling out with developer Wolverine Interests LLC, the city of Hutto brought in Legacy Development to lead the way on the $800 million site. At an Oct. 15 open house, rather than unveil a new site plan and timeline, Legacy sought resident input on the mixed-use development slated for Hwy. 79 at CR 132, adjacent to Fritz Park.

“We don’t really have a plan to unveil tonight,” said Scott Morris, a principal with Blur Workshop, a firm that works with Legacy Development. “I hope you don’t leave disappointed.”

A simplified site map shows zoning for sports-related amenities, including the originally proposed 24 turf baseball fields. Plans for retail and residential are still in play, Morris said, and an event center/sports complex is in the works as well.

“This is very preliminary,” said Ashley Lumpkin, Hutto’s executive director of business and development services. “It may be modified. A lot of this is still in flux.”

Questions from the public centered on managing the flow of traffic in and out of the site, and which roads would be publicly or privately accessible. “From what we’ve heard so far, the main concern is traffic, and rightfully so,” Morris said. “We’ll be bringing in a lot of traffic.”

A preliminary road diagram was presented, with designations for main roads, residential and service roads within the site.

Lumpkin said the city is evaluating “multiple ways to get in and out of the site and in and out of Hutto” and working with regional partners to establish connectivity.

Community members in attendance raised questions about the duration of construction and whether safety measures will be in place on public roadways while construction is ongoing.

Lumpkin said residents can expect to “see dirt moving” on the site in spring 2020. The goal, she said, is for the baseball fields to be completed in time for the originally slated Memorial Day Weekend 2021 tournament.

However, Morris stressed that the entire project could take seven to 10 years to complete in all.

“As we think through this project, it is not a 24-month construction,” he said.

Community members in attendance raised concerns with the proximity of the baseball fields to Clarks Crossing and Carol Meadows neighborhoods.

Several questions were posed about whether measures will be in place to manage light and noise from baseball games.

City staff said light, noise and other nuisances will be taken into consideration as Legacy develops its site plans.