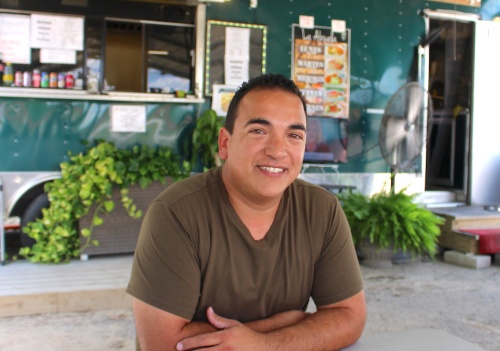 Jesse Flores, owner of The Food Zone, opened the food truck park April 2018 with the idea of bringing a variety of cultures and flavors to the Porter area. The unsuspecting lot off FM 1314 has space for eight food trucks, but it is currently home to five trucks serving homemade dishes every day of the week.

“Our idea was to have a place where people could come and eat different types of foods—where they can come here every day and have different foods every time they come,” Flores said.

For example, Goku’s Burgers, a food truck that opened July 20, is drawing the attention of young and old alike with its flair for Monterrey flavor in a Texas-sized burger and its overt passion for “Dragon Ball Z.” Co-owners and Monterrey natives Rolando Macias and Isabel Cantu named all of their menu items after “Dragon Ball Z” characters.

Cantu said word of mouth about Goku’s Burgers’ unique fusion of flavors and fresh food quality has been steadily bringing in new customers.

“So far, [the menu items] have all been popular because—as a new restaurant—people want to try and taste our fusions of flavors,” she said.

The Food Zone is also home to Puerto Rican food, Hawaiian barbecue, an authentic Mexican truck as well as a Tex-Mex eatery. A new taco eatery will soon open as the park’s sixth truck, and Flores said he hopes to have a pizza truck in the future.

Flores is no stranger to the restaurant industry; he and his wife are also the owners of Tacos Flores, an authentic Mexican eatery off FM 1960 in Humble that celebrated 16 years in business in August.

When Tacos Flores opened, it, too, began as a food truck, Flores said. Over the years, the small trailer expanded to include a full kitchen, a closed-in dining room and outdoor seating. Flores’ experience growing a food trailer into a thriving local business helps him encourage businesses in The Food Zone to do the same, he said.

“I never imagined it growing to what it is now, so that kind of tells me that if we were able to do it, anybody can do it,” Flores said. “It takes a little time, but just be patient and just be consistent with the taste of the food.”