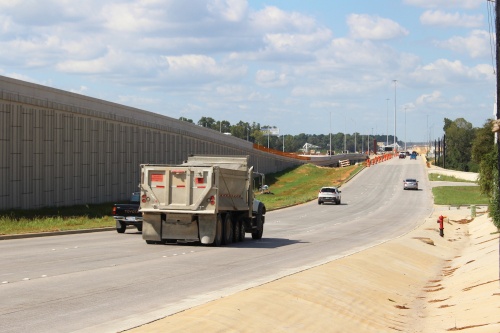 Hwy. 249 tolled lanes are expected to open in Tomball in mid-December, according to the Harris County Toll Road Authority.

New toll Hwy. 249 lanes in Tomball are slated to open in mid-December, said Matt Kainer, the assistant director of maintenance and construction engineering for the Harris County Toll Road Authority.

“We’re doing everything we can to get to the February 2020 [opening date], which I don’t see there’s going to be a problem of us making that at all,” said Riley, a member of the Montgomery County Toll Road Authority, which is made up of Montgomery County commissioners.

Further, Texas Department of Transportation officials anticipate the extension of Hwy. 249 through the city of Magnolia to open in spring 2021.

The three agencies are extending Hwy. 249 from FM 2920 in Tomball to Hwy. 105 in Navasota to improve regional mobility, officials said.

“As communities in and around the metropolitan Houston area continue to grow, once complete, the [Hwy.] 249 Extension Project will provide Magnolia-area residents and others a safe, reliable and aesthetically pleasing corridor by linking suburban communities with major roadways,” TxDOT Public Information Officer Emily Black said in an email.

The HCTRA segment from FM 2920 to Spring Creek totals $130 million, Kainer said. The project includes a six-lane tollway with three-lane frontage roads in each direction, according to HCTRA information.

With main lanes close to opening, crews still must pave the northbound lanes, which is slated to be complete in late October or early November; finish improvements to the detention basin north of Lone Star College-Tomball; and establish vegetation in the project area, Kainer said.

“We’re just ready to get the road open so drivers can use it and continue to improve mobility in the area,” he said.

This portion will include no additional toll plazas, but entrance ramps will be tolled at FM 2920 and Baker Drive, as will an exit ramp at FM 2920, according to agency information.

Kainer said HCTRA has held monthly discussions with Montgomery County since January to ensure drivers north of Spring Creek will be able to enter and exit the tollway.

“The thing we did not want to happen is to have Harris County ready to open up their section across the creek and then us not be ready to accept the traffic,” Riley said. “That would just be a total snafu for all of us, so we shuffled some things around and started redoing some of our work schedules and worked on the south end of the project to keep up with Harris County.”

This summer, Hwy. 249 crossovers at Hardin Store Road and Patridge Circle were permanently removed for tollway construction, and a traffic signal at Woodtrace Boulevard was installed to improve safety, Riley said. However, he said no other traffic signals will be added along MCTRA’s portion.

A toll plaza will be added near  Hardin Store Road with tolls starting at $1.25 for a passenger vehicle, and Woodtrace Boulevard-FM 149 ramps will be tolled, Riley said.

Part of TxDOT’s extension will also be tolled from FM 149 in Magnolia to FM 1774 in Todd Mission, according to TxDOT information, with a nontolled segment extending Hwy. 249 from Todd Mission to Hwy. 105 in Navasota. The $347.9 million tolled section, Segment 1, is slated to open in spring 2021, and Segment 2 will open from FM 1774 to Hwy. 105 in spring 2023, according to TxDOT information.

TxDOT officials said residents will see bridges over FMs 1774, 149 and 1488 constructed in the next few months and should expect daily lane closures in those areas as a result. Paving of the main lanes in the Magnolia area will begin this fall.

“From Pinehurst over to Grimes County, that’s all virgin property. There’s never been anything there,” Riley said. “It’s going to be a different world over here west of [FM] 2978.”