Sugar Land 95 remains are one step closer to reburial 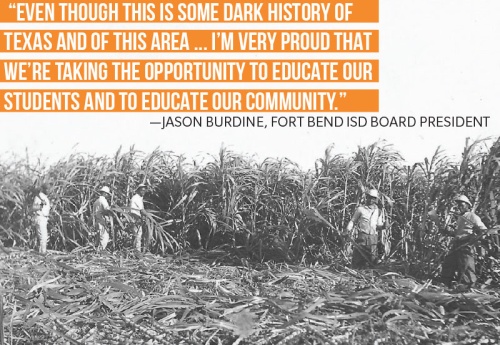 The Sugar Land 95 are believed to have been convict laborers who died working in sugar cane fields in the late 1800s and early 1900s.

More than a year and a half since the discovery of historic human remains at Fort Bend ISD’s James Reese Career and Technical Center construction site, the Sugar Land 95 are one step closer to being reburied where they were originally found.

Despite concerns raised by the public, FBISD officials approved during a Sept. 23 board meeting a $284,000 contract with locally owned and operated Missouri City Funeral Directors at Glen Park for the reinterment of the Sugar Land 95, former convict laborers who would have died in the late 1800s and early 1900s. The contract includes burial vessels, a marker system and headstones.

“Our responsibility is to ensure these remains are reintered and that we all move forward in a positive and healthy way that tells the truth about the horrific practices of the state-sanctioned convict leasing system,” FBISD Superintendent Charles Dupre said.

Although district officials and Fort Bend County officials agreed to work together on reburial earlier this year, that task was transferred back to the district this summer. Precinct 4 Commissioner Ken DeMerchant said he still wants to work with the district on this project.

“I would like to be a part of any ceremony planning committee,” DeMerchant said. “I would volunteer myself and then also include people from the community so that we make sure that everybody feels like they’ve had input into this.”

Since the discovery, archaeologists have collected DNA samples from each set of remains, in hopes of one day linking living descendants to the Sugar Land 95. For the reburial of the remains that were exhumed last summer, the board proposed hosting a preburial ceremony and blessing along with a post-reburial memorial ceremony. Both would be public events.

No DNA links have been made yet. However, the district has commissioned the Texas Archaeological Research Laboratory at The University of Texas at Austin to conduct testing. Meanwhile, community members have been scouring archives of Texas prison records and found the names of 64 individuals who were in the same labor camp, district officials said Aug. 16.

“At some point this could all come together where once the DNA testing is done we can identify specific remains. Then through genealogy studies we’ll be able to then perhaps identify descendants,” Dupre said.

Sam Collins, who spoke during public comment Sept. 23, said he is against reintering the bodies right now and in favor of working with the county.

“Fort Bend ISD has the legal right to make the decision tonight to approve, but we know that slavery was legal, Jim Crow was legal, segregation was legal, but it wasn’t right,” said Collins, who is on the board with the National Trust of Historic Preservation. “The world is watching.”

Those who spoke during public comment against moving forward so soon with reburial worried—should living descendants be found—the remains would need to be exhumed again.

However, board member Addie Heyliger said during the board meeting there is no way to know how long identification of descendants could take.

“For me personally, to honor the bodies is to not have them [exhumed]where they are today,” Heyliger said. “I really would like for someone to tell me why it’s better to keep them out and wait indefinitely for a [DNA] match.”

Reginald Moore, president of the Convict Leasing and Labor Project, who warned the district there might be historic human remains at the site, also spoke during public comment, saying he felt the district should have known the discovery was bound to happen.

“Mr. Moore did bring to our attention that there were potentially bodies on that site, and therefore we did take steps to ensure that either there were none or if we found something that we preserved that cemetery,” board member Kristin Tassin said.

Since February, FBISD and county officials have been in negotiations over how to handle the reburial process and the transfer of the cemetery land to the county.

During Texas’ 86th regular legislative session, local lawmakers helped pass House Bill 4179, authored by state Rep. Rick Miller, R-Sugar Land. This bill allows Fort Bend County to own, operate and maintain a cemetery, such as the one located at the school site.

DeMerchant said negotiations had slowed with the district but picked back up in early of September. Negotiations have been focused on the cost of land and whether the district would donate the land to the county, he said.

“I feel good about us coming to some sort of agreement,” he said. “Hopefully we can get everything nailed down soon.”

Adding to public response, a letter was filed Sept. 23 to the court of appeals by Scott West, a Sugar Land-based attorney. In the letter, West accuses FBISD of attempting to circumvent the jurisdiction of the court of appeals as well as the local 434th district court by moving forward with reburial without approval from the courts.

West’s letter also states, “Fort Bend Independent School District’s blatant disregard of the memory and legacy of the Sugar Land 95 is appalling. Its plan to bury them all in a mass grave, with no agreement with the County to insure the appropriate memorial for each lost soul is unbelievably callous and lacks awareness of the sentiment of the community.”

Dupre addressed the letter at the Sept. 23 board meeting, reiterating that the district never planned to rebury the remains in a mass grave.

“In no way can our plan just be described as a mass grave, and for someone to describe it as such is incomprehensible and in my view disgusting and hurtful not only to this community but to the Sugar Land 95,” Dupre said.

In late 2018, FBISD was involved in a 434th District Court process regarding where to rebury the remains. The case eventually escalated to the First Court of Appeals.

Richmond attorney Mike Elliott, who served as an impartial assistant to the district court in late 2018, said he does not feel the district has the authority to make these reburial decisions.

“The education code says their rights and responsibilities are to teach kids,” Elliott said. “It’s not to run a cemetery. They’re doing cemetery stuff with no license and no legal authority, in my opinion.”

However, Amanda Bubela, FBISD’s director of external communications and media relations, clarified the letter from West does not affect the contracting process for Missouri City Funeral Directors.

“Following the action taken by the board [Sept. 23], the administration will continue negotiating the contract with Missouri City Funeral Directors and then plan the appropriate memorial ceremonies,” Bubela said.

Dupre said reburial will occur in the next few months, and dates for the services will be announced soon.