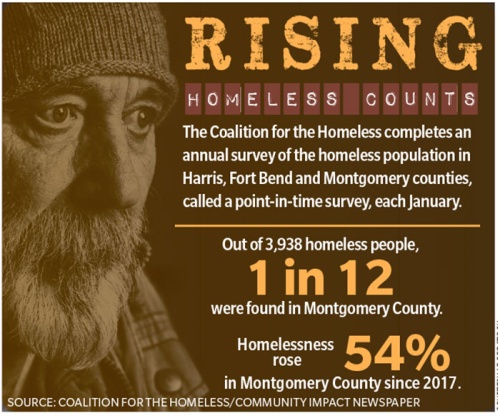 The Coalition for the Homeless completes an annual survey of the homeless population in Harris, Fort Bend and Montgomery counties, called a point-in-time survey, each January.

Susan, a 73-year-old woman, became part of Montgomery County’s rising homeless population when she was dropped off with her belongings in early September at Blue Iguana Taco House, said Shirley Jensen, the interim executive director for Magnolia-based nonprofit Society of Samaritans.

After researching potential solutions, Jensen said she found essentially no local options for Susan: nearby shelters could not provide long-term care, were full or had specific criteria Susan did not meet. Eventually, a place was made for Susan at Interfaith Ministries in The Woodlands, Jensen said, while she and SOS volunteers helped Susan find long-term arrangements.

“This is what homelessness looked like for us this week,” Jensen said.

Like SOS, nonprofits across Harris and Montgomery counties provide some type of service for people who are homeless, a number that has risen by 54% from 2017-19 in Montgomery County to 298 people, according to a January report from the Coalition for the Homeless, surveying Harris, Montgomery and Fort Bend counties.

This means out of the 3,938 people experiencing homelessness within the report’s survey area, 1 in 12 homeless people were found in Montgomery County in January.

In Harris County, the homeless count decreased 6% from 2018-19, according to the same report. Tomball Police Department Chief Billy Tidwell said the city’s homeless population is so small that many are known by name.

“Other areas have really large [homeless] populations, and they contribute to a number of problems in that area, but we’re not really seeing a whole lot of that,” Tidwell said.

The 2019 Coalition for the Homeless report found homelessness in Montgomery County grew from 203 people in shelters and 74 people without shelter in 2018 to 212 sheltered and 86 unsheltered in 2019.

The coalition evaluates the homeless populations of Montgomery, Harris and Fort Bend counties by collecting data on people living in shelters, transitional housing or no shelter on a single night in January.

The survey is intended to provide a snapshot of trends, said Nancy Heintz, the Coalition for the Homeless’ Montgomery County project manager. The coalition reports the number of homeless people is down 52% since 2011 across the Greater Houston area, but Montgomery County was not included in the survey until 2017.

“We don’t encounter homeless people very often, and when we do, we refer them to SOS, or they are just traveling north to the Plantersville area,” Magnolia Police Department Chief Terry Enloe said.

Primary factors of homelessness include unemployment, inability to pay rent or a mortgage, and a lack of transportation, local officials said.

“We have a shortage of affordable housing. Then we keep having [heavy flooding events], so housing that is generally affordable and low-income was the housing that was mostly destroyed,” said Joanne Ducharme, director of Montgomery County Community Development, in a Sept. 6 interview.

Tropical Depression Imelda hit the Greater Houston area Sept. 19, resulting in high floodwaters in portions of Harris and Montgomery counties. While Tomball and Magnolia were spared from floodwaters, it is still unclear how the storm affected homeless individuals in Harris and Montgomery counties, said Sara Martinez, the Coalition for the Homeless’ director of development and communications.

“We are still communicating with partners to fully evaluate the effects of Imelda on the vulnerable population of Houstonians experiencing homelessness,” she said in a Sept. 23 email.

Further, a lack of public transportation in Tomball and Magnolia causes difficulty for those who may find a job, Heintz said.

“What ends homelessness is housing and employment, because you can’t afford a home or an apartment without having some kind of income,” she said. “A majority of the homeless population is willing to work, they just don’t have the opportunities.”

To target homelessness countywide, MCCD developed a 5-year plan in 2014 specific to battling homelessness. MCCD—a department of the county funded by the federal government—has been tasked with developing 5-year plans to address community needs since 1998, Ducharme said.

The homeless plan spans 2014-19; however, projects can roll over into future five-year plans, she said.

“The trend [in homelessness] is being combated by the projects we’re putting into place. Sometimes you see a stable number, and that’s a positive result because people are coming in [to the county] faster, and we’re reducing [the homeless population] equally fast,” Ducharme said.

The original plan included three large projects: the construction of one larger or two smaller shelters, adding an empowerment center to house resources for the homeless population and building a residential treatment facility for substance use, Community Impact Newspaper reported in December 2014.

The empowerment center was built in 2015; however, after funding was redirected, the center was turned into a Meals on Wheels kitchen, which helps keep elderly people in their homes, Ducharme said.

“Meals on Wheels enables the homebound elderly to stay in their homes, and in some of those cases, that keeps the elderly people from becoming homeless,” she said.

While the construction of shelters did not occur within the plan years, Ducharme said the department is in negotiations with nonprofits to establish two smaller shelters, potentially in the western and central parts of the county. However, an official announcement was not available by press time Oct.1.

Another goal that did not come to fruition was the residential treatment facility, she said.

“That project was closed out at feasibility. It’s very, very expensive to operate,” Ducharme said. “Nobody was interested in taking it on, but we’ll probably revisit that.”

MCCD’s next five-year plan focuses on job skills development and independent living, she said, which relates to the county’s homelessness concern.

“It ties into the homelessness still. [The plan] is for helping people to live independently without government assistance to try to relieve the pressure on the nonprofits and the various support organizations,” Ducharme said.

Jensen said she believes long-term solutions for reducing homelessness could include more job training and educational opportunities as well as addressing the lack of affordable housing and public transportation.

“First, [people] lose their job, so they can’t pay for their home or their car, and they lose those too—which often means they lose their belongings. They [also] can’t apply for jobs without a computer or copies of their Social Security card or ID, which require printers,” Jensen said. “It’s a vicious cycle.”

With several existing facilities based in Conroe, The Woodlands and Houston, Jensen said Magnolia sits in an area with no shelters and nowhere for the homeless to receive educational opportunities or specified jobs.

“Our objective is not to enable homelessness; our objective is to help people overcome it,” Allison said. “We begin working with people immediately on getting a job and getting them out of their situation.”

Although the U.S. Department of Housing and Urban Development provides grants to local entities like MCCD—which receives about $3 million in various grants each year to fund projects, such as those related to homelessness—for shelter operations and rapid rehousing, Ducharme said she believes more funding and education regarding homelessness on a national scale are necessary.

“We can’t be criminalizing homelessness, creating ordinances to push unsavory people out of sight,” she said. “These people are not dangerous. They need specific kinds of help.”

Andy Li contributed to this report.