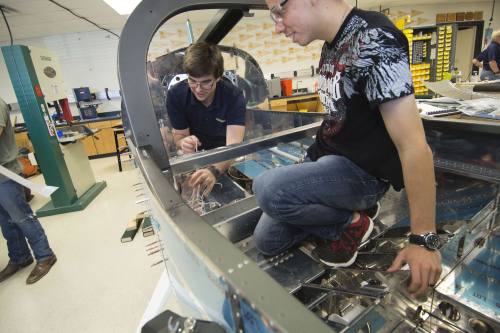 New Caney ISD hopes to implement a new career and technical education, or CTE, program in the 2020-21 school year in which students would have the opportunity to build an aircraft and eventually fly in it.

At the Sept. 16 board of trustees meeting, CTE Director Warren Stipling said the district has discussed starting an aviation program for several years, and NCISD would accomplish this by partnering with nonprofit Tango Flight to offer a hands-on aerospace and aviation program.

“The goal of what we’re trying to do is turn kids on to careers in aviation,” Stipling said.

Stipling said the two-seater plane would be built at Porter High School throughout a school year; however, advanced-level engineering students from both Porter and New Caney high schools would have the opportunity to build the plane.

He said the aviation course would align with a program the district is also considering to specialize CTE programming in its high schools. If implemented, lower-level CTE courses would continue to be offered at every campus, but specializations in advanced-level classes would be offered at specific high school campuses.

The program would cost the district roughly $81,000 to launch and purchase materials, George Dowdy, an engineering teacher at Porter High School, said during the meeting.

"That's the initial cost, but it's basically free once we get the first [plane] sold," Dowdy said.

In addition to discussing the aviation program, trustees approved the purchase of 14 acres of land for the new Keefer Crossing Middle School. Located at 21460 Gene Campbell Road, New Caney, the campus would replace the current aging campus at 20350 FM 1485.

Scott Powers, NCISD executive director of public relations, said via email that construction on the campus is set to begin in spring 2020, and the school will open to students in August 2021. The replacement campus will increase the campus’ capacity from about 1,050 students to 1,500 students.

Powers said the district is still deciding what will happen to the current middle school.

“As for the current Keefer Crossing facility, the district will work through a process to determine the most appropriate course of action,” Powers said. “There are no final plans as of yet.”