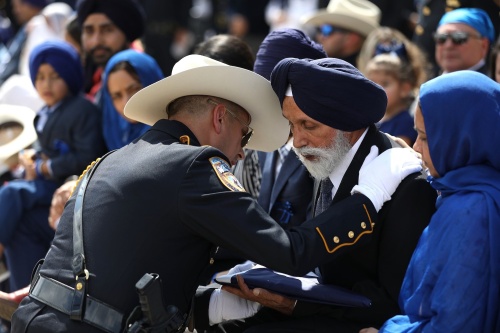 Public officials, law enforcement officers and members of the Sikh community mourn the loss of Deputy Sandeep Dhaliwal Oct. 2 at the Berry Center.

Memorial services were held Oct. 2 for Harris County Sheriff’s Deputy Sandeep Dhaliwal, who was shot while conducting a traffic stop in the Copperbrook subdivision on Friday, Sept. 27. The 42-year-old was a 10-year veteran of the HCSO and is survived by his wife and three children.

“He was an uplifting spirit amongst our group, and he was definitely a valued part of our team,” Sgt. Adam Lightfoot said. “We worked together six and a half years. He never lost the excitement for the job that he did, and he never met a stranger.”

Those who knew Dhaliwal spoke about his positive influence on the community in which he lived and worked. He was known for exemplifying his Sikh faith through humanitarian work, including rallying support for victims of hurricanes Harvey and Maria.

“I don’t know why the world is dark or dangerous or why bad things happen to good people like Officer Dhaliwal, but I do know that he would want us to come together and not give in to the darkness,” community volunteer Amy Lasko said. “He would want us to embrace and celebrate our differences, do good deeds and spread love.”

In the aftermath of Dhaliwal’s death, Sikh service members and law enforcement officials have signed letters advocating for national agencies such as the U.S. Department of Defense to update accommodation policies for religious minorities.

“In 2015, Deputy Dhaliwal became the first Sikh on the force to wear his articles of faith, including his turban and unshorn hair, while serving,” Sikh Coalition board member and Houston community leader Manpreet Singh said in a statement. “In doing so, he exemplified the Sikh ideal of seva, or selfless service to his community. Though his passing is deeply painful, it serves as an important reminder that the Sikh faith poses no barriers to serving our communities proudly.”

According to the Sikh Coalition, about 25 law enforcement agencies across the U.S. have permitted religious accommodations for Sikhs, but the U.S. Air Force, Marines and Navy still prohibit Sikhs and other religious minorities from serving with their religious articles of faith.

Donations can be made to support Dhaliwal’s family via GoFundMe or the HCSO Benevolence Association.