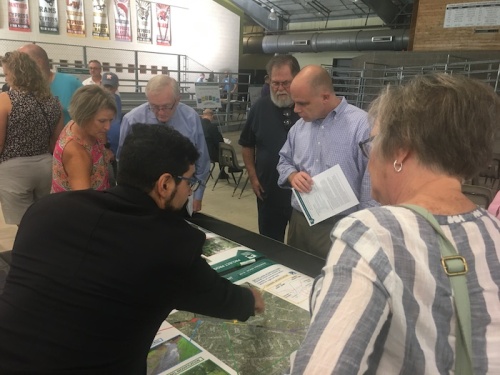 A flood control project on Cypress Creek that has been on Harris County's radar since at least 2010 is moving forward thanks to funding made available from a $2.5 billion bond referendum passed last year.

The project targets a channel near the Timberlake Estates subdivision in Cy-Fair that has seen repetitive flooding dating back to at least 1994, including during storms that took place in 2009 and 2012 as well as during the Tax Day Flood of 2016 and during Hurricane Harvey in 2017, according to information from the Harris County Flood Control District.

During Harvey, neighborhoods along the channel—including Ravensway, Timberlake Estates and Cypress Creek Estates—saw widespread flooding, said Jessica Koutny, a senior project manager with LJA Engineering who is working on the project.

“These developments were constructed prior to the first Harris County drainage detention requirements that were initiated in 1984," Koutny said. "That means that these neighborhoods were developed without the consideration for extreme events, such as the 100-year rainfall event.”

At a Sept. 24 community engagement meeting hosted by the HCFCD, Koutny discussed the efforts being undertaken to reduce flooding along the channel, referred to as the K163 channel by HCFCD officials. Once the project is completed, the channel will have the capacity to handle the amount of stormwater associated with a 100-year storm, or a storm that has a 1% chance of occurring in any given year, she said.

To address the problem, engineers have come up with a multipronged solution that is expected to be complete by spring 2021 at an estimated cost of $10 million, Koutny said. Solutions along the northern part of the channel mainly involve channel maintenance and making repairs to eroded slopes.

Farther south, the HCFCD plans to excavate the channel at various points and put in a several 8-by-6-foot box culverts, or structures that allow water to flow through the excavated area. Each culvert will have inlets on top that will carry water to HCFCD channels, Koutny said.

No aspect of the project will require the acquisition of right of way, relocating utilities or working in an environmentally sensitive area, Koutny said. In accordance with county regulations, the project will not make flooding worse downstream or upstream, she said.

Brennan Cook, a project delivery manager with the Harris County Engineering Department, said the channel improvements are crucial to another project in the area intended to improve drainage within Timberlake Estates. Drainage improvements target infrastructure that carries water through neighborhood streets and into larger channels, such as the K163 channel.

A detailed study and design of the drainage improvements is expected to begin in 2020, at which point the channel improvements will already be underway, Cook said. Construction on the drainage work will begin later in 2020 and run through 2024, he said.

Residents can learn more or provide feedback on the improvements at www.hcfcd.org/F23.