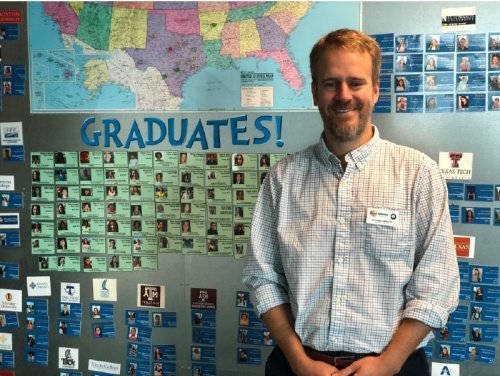 Data shows the gap between Central Texas low-income students and their peers in the area is growing when it comes to completing post-high school education.

According to the Texas Higher Education Coordinating Board, the number of students from the 13-county Central Texas area who earned a two-year, four-year or master’s degree has increased by 20.43% over the last four years. However, economically disadvantaged students are not seeing a proportionate share of those gains.

In 2015, economically disadvantaged students made up 45.8% of all degree completions by Central Texas students, and in 2018, that number dropped to 43.73%, per the THECB.

Breakthrough Central Texas is a nonprofit organization working to close that gap and help students who want to be the first in their families to attend college.

Michael Griffith, executive director at Breakthrough Central Texas, said there is a common perception that barriers for low-income students are simply financial. In reality, they include social and emotional challenges far more complex than a simple issue of cost.

“They are facing the entire gamut,” Griffith said.

The challenges do not stop upon high school graduation. Often, Griffith said, students arrive on college campuses already feeling out of place.

“When you are in that space where you’re thinking,  ‘I’m not sure I belong here,’ then everything that happens becomes a tally of, ‘Do I belong here or do I not?,’” Griffith said.

Breakthrough Central Texas works with students from sixth grade through high school in Austin, Manor and Del Valle ISDs to break down all those non-financial barriers, and advising services continue through college. Programs start with a six-week middle school summer program and then continue through the school year, with one-on-one advising and academic services that become more tailored to certain skills as students get older.

Breakthrough Central Texas launched a campaign Sept. 12 to raise $10 million in philanthropic dollars to allow it to increase staff and build its capacity, with the goal of increasing enrollment by more than 1,000 students by 2024.

If the nonprofit reaches that goal, Central Texas will become the top area in the state in the number of low-income students earning college degrees, according to Griffith.