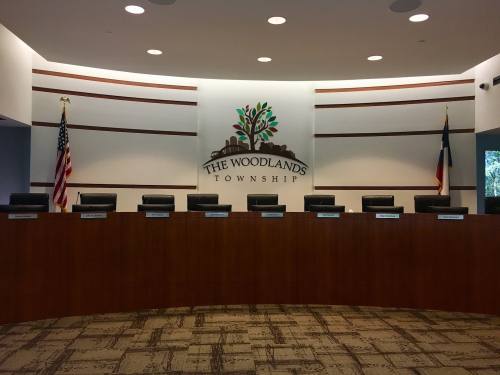 The Woodlands Township board of directors voted to decrease the township’s 2019 property tax rate by 1.45% during a contentious specially called meeting Sept. 18.

The final rate agreed upon by the board, the effective rate of $0.224 per $100 valuation, was unanimously approved—despite reluctance from several board members—in order to avoid potential consequences caused by further delaying the decision.

The three options featured varying maintenance and operations rates and the same debt service rate. The board previously debated the same three total rates without resolution at a Sept. 12 meeting.

According to a township budget and tax rate presentation, the estimated tax bill calculated from The Woodlands' average home value would come out to $992, $1,006 or $1,018 based on the effective, equal and raised rate proposals.

During the Sept. 18 meeting, Chairman Gordy Bunch, Treasurer John Brown, and directors Brian Boniface and Bruce Rieser all expressed their preference for the highest rate. Bunch said his stance stemmed from the state-mandated cap on annual property tax revenue increases that will go into effect Jan. 1, in addition to possible future financial concerns for the township such as the growth of its fire department, corporate relocations, and declining development and tax revenues.

“We are at build-out; we are facing known increases in expenses in 2023," Bunch said. "We are facing losses of revenue that are outside of our control.”

Rieser agreed that setting the lowest of the three rates could result in financial problems in the future, including a negative effect on the township's bond rating if budget needs are addressed through reserve funding in the future.

“You guys are introducing a risk that’s absolutely avoidable,” he said. “I am really disappointed that we can’t come together as a board knowing exactly what is going on. No one on this board is denying the risks that we’re looking at, no one, and yet we're sitting here arguing about $14 a year for the average taxpayer.”

“I have no personal agenda, but people have asked for a reduction in taxes, and our own state legislators … have forced tax reform and relief,” Snyder said, adding that other nearby entities had also adopted lower tax rates this year.

Stromatt said that the board could reconvene at a later date to address any current budget concerns related to implementing the effective rate this year.

"The board adopts the budget, which we've already done. ... And it's my understanding that the board amends the budget," she said. "It's not set in stone; there's nothing that says that we can't come back to a meeting down the road if we see that something isn't working and make a change."

In initial votes, the two higher proposed rates failed in 4-3 votes with Bunch, Brown, Boniface and Rieser voting in favor of both options while the lower rate failed 3-4 with support from McMullan, Snyder and Stromatt. Following further deliberation among the directors, Bunch motioned for another vote on the middle rate as a potential meeting point that again failed 4-3.

"A community with assets over $20 billion, a township with assets over $300 million and with a million-dollar cushion in the future tax year, a $130 million budget, it’s a shame that we can’t even compromise between our two positions," Bunch said after the vote.

Supporters of the higher two rates eventually relented to approve the effective rate despite their reservations, given the lack of progress between the two sides and the fact that the effective rate would automatically be set for the township if no decision was made by Sept. 30. Additionally, the township would likely have suffered financially if the rate was decided past the Sept. 18 deadline for compiling tax materials set by Tammy McRae, Montgomery County tax assessor-collector, at the board’s previous tax rate meeting.

“If the rate is not adopted tonight ... the township will bear the additional cost of having a township-only tax statement,” said Monique Sharp, the township’s assistant general manager for finance and administration. “Secondly, and perhaps of greater concern in talking to Tammy, is that it would likely negatively impact our tax rate collection.”