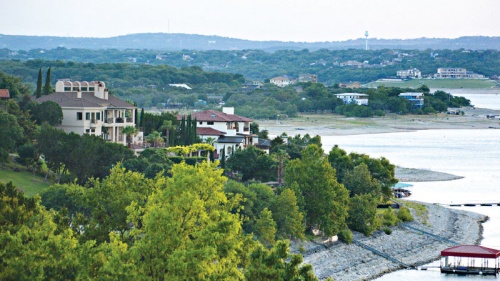 Austin resident Todd McClure said he has been dealing with difficulties brought on by several degenerative discs in his back since he was 21.

Now in his early 50s, McClure lives in the Windy Ridge Apartments, an apartment complex a few miles north of the Four Points area in Northwest Austin offering low-income housing tax credit, or LIHTC, apartments as well as its regular market-price units.

For varying reasons—mainly, his worsening back condition over the last three decades—McClure said he has, of late, been unemployed and seeking work in the service industry, and the fact that he lives in a complex that offers tax-credit units is a big help to staying afloat. Even with a recent rent hike—in July, his payment went up from $700 to $783 for his one-bedroom apartment—his cost of living is substantially lower than it would be in non-tax-credit complexes in his area.

“If it hadn’t been for the tax-credit program at Windy Ridge, I would have trouble making rent at current market prices,” McClure said. “A lot of that is due to the fact that current market values require that you make at least three times what rent costs, and being on disability makes that virtually impossible. So, the tax credit program helped me get my foot in the door.”

In western Travis County, there is evidence the need for affordable housing far outpaces availability.

A little south of where McClure lives, the Cardinal Point Apartments that opened in 2017 in the Four Points area range from $780-$1,295 per month for rent, but the waitlist for that complex has closed, according to its website.

Beyond the Cardinal Point and Windy Ridge apartments, western Travis County has extremely limited inventory for affordable housing, and in the Lake Travis area south of Four Points, there are almost no options.

But more affordable housing in the Lake Travis area is coming. In November, Travis County and the Strategic Housing Finance Corporation approved a low-income housing tax credit complex called the Lakeway Apartment Homes to be created by applicants Rise Residential and the SHFC.

Robert Onion, SHFC director of real estate development, said the Lakeway Apartment Homes will contain 180 units, ranging from efficiencies to three-bedroom apartments. Tenants earning between 30%-80% of the area median income will qualify to live there, pursuant to a new 2018 law allowing for income-averaging for low-income tenants.

Lakeway Apartment Homes is also part of the LIHTC system, which is a primary policy tool for the federal government to encourage the development and rehabilitation of affordable rental housing.

Onion confirmed the Lakeway Apartment Homes, so close to Lake Travis, are a rarity.

“One of the reasons it is difficult to get any affordable housing done in Western Travis County is the land cost,” Onion said. “Your costs to build [affordable housing complexes] are substantially the same as a conventional property.”

Onion said the Lakeway Apartment Homes complex will cost around $39.7 million, will be funded through a combination of a state-allocated tax-exempt bond and 4% housing tax credits, and will be move-in-ready likely in August or September 2021.

There is a small piece of land adjacent to where the Lakeway Apartment Homes will be that could work for a Phase 2 addition to the complex, but Onion said there are many development challenges to making that a reality.

“It is owned by a private owner, so it would have to be purchased,” he said.

Lakeway Mayor Sandy Cox said one of the reasons affordable housing is so crucial for her city and the Lake Travis area is because it is tied to the existing workforce issues.

Lakeway staff are working on a comprehensive plan for the city, and Cox said one of the statistics gleaned from that study indicates 90% of jobs in city limits are done by nonresidents. Marry that with the fact that 40% of the workforce living in Lakeway are driving into Austin to work, and you get a city that is completely at odds with its workforce, she said.

Whether it is a transportation issue or the fact there is not enough affordable housing in the area for its service industry and other low-wage workers, Cox said sometimes, it is important to have multiple solutions, and several Lake Travis-area leaders are joining in to help.

Mitchell has already spoken with or reached out to representatives from seven complexes, including Avanti Hills at the Hill Country Galleria.

No concrete plans have yet been made, but Mitchell said she believes lack of access to attainable housing, more than any other reason, is why hourly and service industry workers are not living in the Lake Travis area.

“It’s almost past urgency,” Mitchell said. “It really is a community issue and not just a business issue.”

Mitchell reached out to Elisha Cianci-Gorder earlier this year to discuss possibilities for attainable housing. As the vice president for multifamily for Christopher Investment Co., Cianci-Gorder represents Avanti Hills at the Galleria.

Avanti Hills already implements a preferred employer program that offers a small monthly discount and an adjustment on move-in fees, but Cianci-Gorder said she told Mitchell Avanti Hills might be willing to extend that program to Bee Cave and Lakeway service industry workers.

Representatives from Avanti Hills have not discussed selecting a block of apartments for tenants making 30%-80% of area average median income.

Many of the complex’s policies would have to change if Avanti Hills were to go that direction, Cianci-Gorder said.

She also said she frequently speaks with new people she meets working Bee Cave service jobs, and she is often surprised by how many people commute to the Lake Travis area.

“They’re coming from quite a distance to work in this area, and some of it has to do with the cost of living in Lakeway and Bee Cave,” she said.

Onion echoed Cianci-Gorder’s sentiments and said he has heard from many Lake Travis-area business owners who complain that they cannot get enough employees because so many lower-wage and hourly workers have to travel to work there.

“In our opinion, [Lakeway Apartment Homes] is going to fill up extremely fast,” Onion said. “And there is certainly a need for affordable housing out there, but it is a challenge. They’re going, ‘When can we move in and get on a waiting list?’ And we’re saying, ‘We’re not even built yet. We’re 24 months out.’ That’s how much demand we are already seeing.”

A little bit east of the Lake Travis area, District 8 in the city of Austin  is targeted for more than 7,000 affordable housing units according to information from the city. District 8 City Council Member Paige Ellis said it is too soon to answer any specific questions about affordable housing in her district, but she has been vocal about her support of Austin’s November $250 million affordable housing bond, which will seek to allocate $100 million of that total into land acquisition throughout the city in targeted areas called Imagine Austin Centers.

Three of those centers are in District 8, according to the Austin Strategic Housing Blueprint, including a tract near where Ellis lives at Walsh Tarlton and Loop 360.

Preliminary numbers issued through the Austin Strategic Housing Blueprint state the city wants to add 60,000 new affordable housing units throughout all of its districts, and of those, more than 7,200 could be designated for District 8.

Ellis said the first release of the land-development code rewrite Oct. 4 will kick off a process of discussions with the city manager, followed by a period of public input on affordable housing throughout Austin. City Council hopes to have a first vote on the issue in December.

Like leaders in the Lake Travis area, Ellis said affordable housing could help with high turnover rates and other workforce issues in her district.

“District 8 is a beautiful district, and a lot of people want to live here because it has a lot of trees and creeks,” Ellis said. “I would want District 8 to be available for anyone, not just certain types of people.”