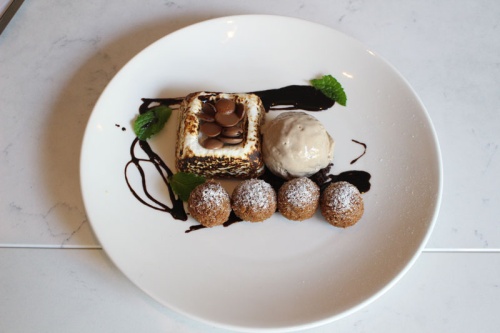 First impressions matter to chef Austin Simmons, the owner of Tris, who believes a guest’s experience should start before he or she arrives at the door.

“We’re all focused on the front-door-to-back-door experience,” Simmons said. “We really want Tris to stand for an overall experience, and we’re really focused on that guest and how they feel when they come into our restaurant.”

Simmons said Tris came about after his experience operating Hubbell & Hudson Market and Bistro at the same location. The idea for rebranding the location in 2018, he said, came from wanting to break away with the association with the market, which closed in 2014, so he named the new restaurant after his daughter.

“It’s a simple, elegant name,” he said. “It has meaning to what we are here. The community has really accepted this new concept.”

Simmons said he has partnered with HeartBand Ranch, located in Harwood, to use older cows for the ribs and beef served at the restaurant. The method is currently being used in Europe but has just started to catch on in the United States, he said.

The ranch provides akaushi and wagyu beef, which are Japanese breeds of cattle. Simmons said he wanted to continue to support Texas farms as much as possible.

“I saw in 2014 that Europe was raising older animals, and I said there’s something here,” Simmons said. “Most cows are harvested at 2 years of age; that’s just how the business goes. Old cows have no value to the rancher. … If the rancher grows, I grow.”

Instead of focusing on the younger cows, Simmons said he highlights cows between 8 and 10 years old. The cows that have given birth and are out at pasture, which are typically reserved for ground beef, have a slower muscle growth, which Simmons said provides a better flavor.

“It’s outselling everything we have,” he said. “That’s new to market. … Nobody is doing wagyu beef like we are. People don’t even know how good this meat is.”

Simmons said using an 8- to 10-year-old cow is mutually beneficial for himself and the farmers because it allows them to use their products more efficiently.

Simmons offers side-by-side tastings of beef from 2-year-old and 10-year-old cattle as well as akaushi steaks that have been dry-aged for 100 days.

“We’re evolving the meat industry,” Simmons said. “I want to help cooks and managers have a better life for them and their family, and I want to provide some sort of evolution in the industry.”

Simmons said he originally had no idea what he wanted to do while he was in school. Despite working a variety of jobs starting at age 15, he said nothing really held his attention due to having attention deficit disorder.

However, Simmons said some of his earliest memories were cooking with his mother and grandmother every Sunday, and through cooking, he found something that could hold his interest.

“I was always around good food, and cooking was easy for me,” he said. “I was intrigued by it, but I didn’t know I wanted to do it for a career. What I found in culinary school is that I can focus when I cook. When you take a person with ADD and you find what they’re passionate about, they excel above a normal person. I can remember I’m working 15 different things at a time because my mind works that way.”