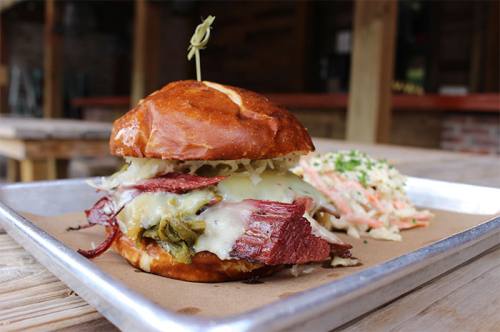 Fire Ant Brewpub owner Bruce Kissinger said he began homebrewing beer about nine years ago and decided he wanted to turn the hobby into a career. Kissinger, who said he has spent a majority of his adult life in Tomball, knew Tomball had German roots—but the city had no brewery.

“Germany is known for what? Beer. A German town like Tomball needed a local brewery,” he said.

Kissinger said he changed his original business idea from a brewery to a brewpub because breweries focus on beer distribution, not people.

“Brewpubs are more intimate, and they have food in addition to beer. This is more of a family-friendly atmosphere than just a brewery,” Kissinger said.

He said city officials had been searching for someone to bring a brewery to the city for nearly six years but had not found the right fit until Fire Ant’s concept. The brewpub opened in October 2018.

Fire Ant Brewpub offers upscale bar food in addition to its 15 signature beers, Kissinger said. Some of the brewpub’s most popular dishes include kung pao Brussels sprouts, the Fire Ant Reuben sandwich and the pimento cheeseburger.

Kissinger said he tries to keep ingredients local when he can. One of Fire Ant’s appetizers is the Local Link Board, which features bratwurst from Tejas Chocolate & Barbecue as well as beef franks from Cameron, Texas-based 44 Farms.

The brewpub also offers trivia or bingo on Wednesdays and live music on Thursdays, Kissinger said.

“I always felt like people [in Tomball] needed a place to get out. We wanted to have a place where people could come enjoy some craft beer, good food and good conversation with their friends and families,” he said.

Kissinger said customer reaction has been more than welcoming.

“The people have been just amazing. You wouldn’t believe how many people visit because one of their friends told them about us,” Kissinger said. “I call Tomball ‘God’s country,’ and we really are lucky to be here.”