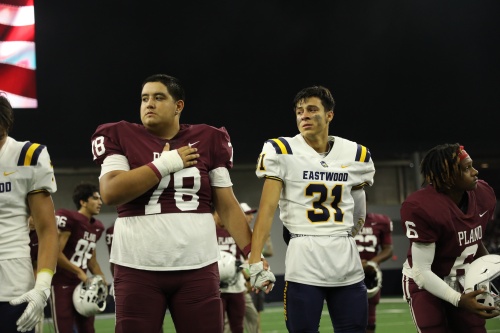 Members of the Plano community, including Plano ISD students and staff, showed their support for Ysleta ISD's Eastwood High at the football game against Plano Senior High School on Sept. 5.

Many in the El Paso community are still recovering after a mass shooting just over one month ago that left 22 people dead.

Plano ISD had some initial concerns about security for the high school game, but those were resolved once Frisco ISD and the Dallas Cowboys offered use of the Ford Center at The Star.

The two teams shared words, hugs and high-fives before the game began, while the schools exchanged gifts on the sidelines. At halftime, bands and drill teams from both high schools performed a combined halftime show.

Prior to the game, Ysleta ISD board of trustees president Mr. Cruz A. Ochoa shared a few words at a media reception that included city council members, school board trustees and district administrations from Frisco ISD, PISD and YISD.

"Look at this. After all this tragedy, something good has come out of it," Ochoa said. "We are Texans; we are Americans; we're part of this duo."

Members of each city and school also spoke at the reception.