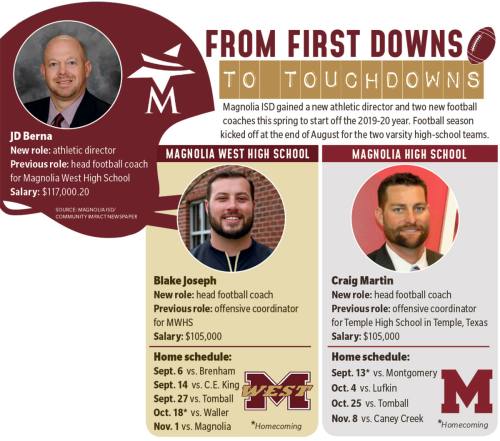 Magnolia ISD gained a new athletic director and two new football coaches this spring to start off the 2019-20 year. Football season kicked off at the end of August for the two varsity high school teams.

Magnolia ISD saw an overhaul of its athletic department ahead of the 2019-20 school year with a new athletic director and new head football coaches at each of the district’s high schools, Athletic Director JD Berna said. This is also the first time all three positions have changed simultaneously, he said.

“Even though I’m somewhat new to my role and we have two new head football coaches, I’ve worked with both of them before now, which makes for a smoother transition for all of us, including the kids,” Berna said.

Berna served as the head football coach for Magnolia West High School for three years before he was promoted to athletic director in February.

“It’s an honor to be able to serve in this capacity and be able to help lead the athletic program at Magnolia ISD. Build champions and develop leaders, that’s my initiative for this year,” Berna said.

After his departure from MWHS, Berna hired Blake Joseph as his replacement and hired Craig Martin a few weeks later as the Magnolia High School head football coach, he said.

“What they bring to the table is immeasurable, because they’re guys of good character, and they know how to motivate, mentor and lead young men and women,” Berna said.

Joseph previously served under Berna as the offensive coordinator at MWHS, while Martin coached alongside Berna at Temple High School in Temple, Texas, prior to Berna’s move to MISD three years ago, Berna said.

“It can be hard to get students and other coaches on board sometimes [with change], but MISD has been great to me,” Martin said.

Martin said his players have been “chomping at the bit” for the season to start, and with a 5-5 record last year, they want to do better this season.

“I’ve really enjoyed getting to know my team, immersing myself in my new district, and I’m excited to coach at the famous Magnolia vs. Magnolia West game [Nov. 1],” Martin said. “We all want to win, but overall the goal of our programs is to provide an experience that [students] can learn from forever.”