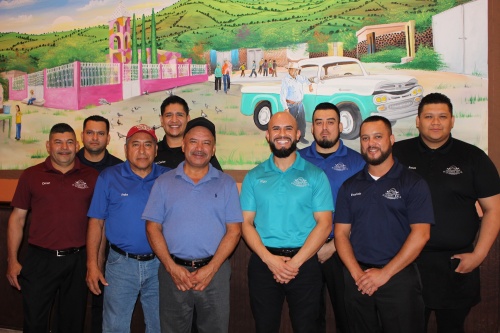 Co-owner Gabriel Nunez said the most important thing at Hacienda Real is keeping his employees happy.

Hacienda Real Mexican Grill & Cantina in Fulshear is a place where Mexican mariachi music plays in the background while employees and customers alike frequently exchange smiles and greetings.

Owner Gabriel Nunez and his son Rigo Nunez, a general manager, are from Celaya, Guanajuato, and have been in the Mexican restaurant business in the Greater Houston area for over 15 years.

“I am here because I know how to cook all my food,” Gabriel said in Spanish. “I know my clients are eating something clean, healthy—things I eat myself.”

But he said opening his own restaurant came with many challenges. He said that he would not have survived had he not partnered with a friend in 1992 to open his first eatery in the Houston Heights called Tony’s Mexican Restaurant. They were also successful enough to expand to a second location in the Katy area on South Mason Road in 2005.

By 2013, Gabriel said he branched off with his two brothers, Eliseo and Juan, and other members of the Nunez family to open the first location of Hacienda Real in Magnolia.

Rigo said he began working alongside his father mainly as a waiter at Tony’s at 15 years old and built many connections with guests who dined at his tables over the years. When he and his father moved to Magnolia, Rigo said his regular customers would commute one hour from Katy at least three times per month to dine at his table.

The same clients eventually convinced his father to open a new location in the Katy-Fulshear area.

“What I love about this job is getting to know people as if they were family,” Rigo said. “I remember having guests with small children when I first started working at Tony’s who became regulars, and I got to watch their kids grow up.”

Gabriel arrived in the U.S. at 16 years old and said he always enjoyed working at Mexican restaurants as a cook. When he decided to open his own, menu items were inspired by bits of each of his past jobs.
The Fulshear location celebrated its one-year anniversary Aug. 4 with a live mariachi band and margaritas.

Gabriel said the most important thing is for employees be happy and that is what keeps the restaurant running smoothly and people coming back.

“It’s a beautiful experience because if you make an honest living and you do it from the heart, people will follow you wherever you go,” Rigo said