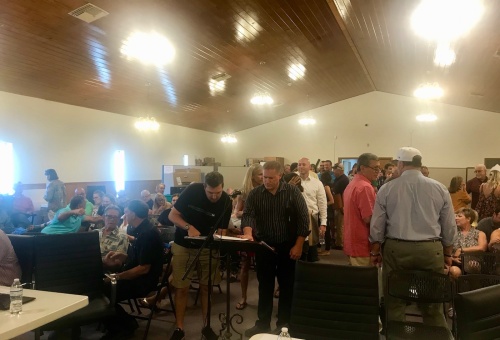 Residents line up to speak during public comment in Dripping Springs on Aug. 13.

After numerous residents spoke up about concerns regarding noise, traffic safety and transient day workers, Dripping Springs City Council on Aug. 13 denied a zoning change for a 1.25-acre site at the northwest corner of RR 12 and Whisenant Lane.

Buddy Lewis—a longtime resident and the owner of Dripping Springs Rental Center— had requested a change to commercial services zoning, which would have allowed him to build a new 3,600-square-foot facility to relocate his business to.

“I’ve been in business for 26 years, but I’m not done,” Lewis said, joined in the council chambers with other employees and family members to support his pitch. “Going forward I need to own my own property so I can continue my business for my employees and my family.”

Dripping Springs Rental Center has been located at 299 Mercer St., Dripping Springs, since 1993. The business offers rentable equipment, from power tools to construction equipment, with customers picking up and dropping off the equipment at the site.

"This council, on multiple occasions, has said you have to protect the local mom and pop businesses that make Dripping Springs what it is,” developer Jon Thompson said. “I can think of few people who actually personify that standard more than Buddy Lewis.”

The new site is located within a 7-acre tract for the future Harrison Hills Business Park, currently zoned for general retail. According to Thompson, allowed uses for the zoning include fast-food restaurants, gas stations and convenience stores, and repair shops and indoor equipment rental businesses.

Although rental businesses are allowed to operate in general retail zoning, those that store equipment outside are only allowed in commercial services zoning, he said.

"Mr. Lewis could actually build a big enough building to put everything inside of it and do it without any variances," Thompson said. "Alternatively, Mr. Lewis could build a more aesthetically pleasing building [as requested] for that same use that is closer to the scale of the uses around him."

Mayor Pro Tem Bill Foulds said the initial zoning was put in place because "commercial services is never appropriate next to a neighborhood," but a buffer between the project and neighborhood and the nature of the project itself made the decision difficult.

"What [will have] the least impact on the community and neighborhood? It might be this [current proposal] instead of a larger barn," Council Member Travis Crow said. "That's the answer we have to sit up here and decide."

City Council also expressed that Lewis' reputation in the community as a positive role model made them feel he would do what was necessary to appease neighbors, including fencing and landscaping to mitigate sound and visual disturbances. However, Council Member Taline Manassian said council could not make a decision based on the character of the applicant.

"We have to look at what is appropriate for this area," she said.

Although council voted to deny the application, it opened the door for a potential planned development agreement for the project in the future. An agreement could require certain elements be included in the development that could mitigate impact on neighbors or limit what could be built there in the future.
SHARE THIS STORY