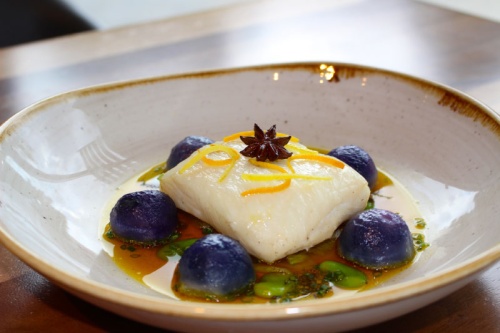 Located in The Westin at The Woodlands, Sorriso Modern Italian Kitchen brings a contemporary take on Italian dining and cuisine to Waterway Square. Sorriso opened in January with the goal of offering a change from the hotel’s previous American eatery, Current.

“The objective was to create an intimate social environment,” said Noni Hughes, the general manager of the Howard Hughes Corp.-owned property. “We didn’t want it to feel stagnant or stale. We wanted it to be open and very active and inviting.”

Hughes said several additions were made during Sorriso’s design, including a charcuterie bar and brick pizza oven. The dining area features a bar, outdoor terrace and more indoor seating than the previous hotel restaurant, along with a new main entrance on the street. It also includes access to the second-floor Como Social Club, where patrons can find a second bar and poolside patio lounge hosting regular events and live music.

Sorriso’s planning team also brought in an Italian head chef and sommelier ahead of its January launch. Wine Director and General Manager Giorgio Ferrero and Executive Chef Enzo Fargione, both Turin, Italy, natives, were responsible for the creation of the restaurant’s menu and global wine list.

“There was the idea to introduce to The Woodlanders and the Houston area at large, the idea of a modern version of traditions from regions [in] Italy,” Fargione said. “Different twists, different colors, different presentations, but with a taste to be very truthful to what the offerings are in Italy.”

Fargione said he worked to avoid cliches associated with Italian cooking while preserving a level of familiarity and accessibility for customers. He said he plans to bring new flavors to the eatery and keep the menu engaging for repeat visitors.

“Even though you don’t really feel seasons that much [in Texas], you can still feel seasons by buying produce that are in season somewhere else,” Fargione said. “If you offer diversity, why wouldn’t you go back?”

In addition to its evolving menu, the restaurant operates a dedicated wine retail room with more than 450 available labels. For his wine list, Ferrero said he sought to compile a selection that provides new tastes and fits with Fargione’s culinary creations.

“Building our list and working with the wine, if you love food it’s just a necessary step,” Ferrero said. “We tried to complement with [the] chef whatever we offer in the wine side ... to make the experience … a 360-degree experience.”

Ferrero and Fargione said they have enjoyed the restaurant’s reception since Sorriso’s opening in the winter. The pair said they regularly have customers visit the restaurant simply to hear a recommendation or have a conversation.

“Giorgio was able to create this bridge of communication … by creating comfort,” Fargione said. “Even if [they] don’t consume anything, people stop by to say ‘Hey, how you doing, I was just walking by just to say hello.’ That is hospitality. That is when you know you do something nice.”