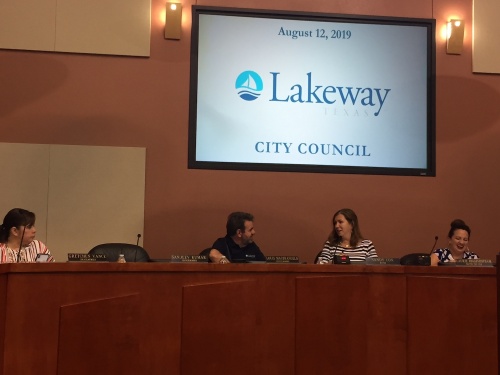 The Lakeway Police Department is requesting an additional $548,052 that would include four new police officers and two new dispatcher supervisors.

The requested positions combine with roughly $77,000 in supplies and services for the Parks and Recreation and Administration departments to bring an extra $937,347 to the FY 2019-20 budget.

The new Lakeway Police Department building that became fully operational this spring constituted a portion of the Aug. 12 discussion, as operating expenses for 2020 are projected at about $256,000.

These and several other departmental requests could amount to a slight increase in the tax rate, according to city officials.

"The most important thing we're going to set is the tax rate," Mayor Sandy Cox said, adding now is the time to decide if the city needs to raise the rate from last year, which was $0.1645 per $100 valuation.

Lakeway's property tax rate has stayed consistent over the last 10 years, Cox said, but she and several other council members stressed that due to rapid growth and rising municipal needs, a modest rate hike could provide numerous benefits to the city and only add less than $50 to the average homeowner's bill for the coming fiscal year.

Council Member Louis Mastrangelo said he wished residents would see Lakeway's portion of their overall tax bill in proper context and echoed the sentiment that a slight increase in property taxes could mean big improvements for Lakeway overall.

"I know raising taxes is a dirty word, but I also think that not raising taxes for the sake of staying at a particular number is worse," Mastrangelo said. "When we're talking about $45 a year [increase in the city's portion of the average Lakeway homeowner's tax bill for FY 2019-20], I think what people see is this huge number, but where our bill might be 7% or 8% [of the overall tax bill], it's just such a small piece of the big property tax that people pay."

Smith also took issue with a $326,330 estimated line item to the city's capital reserve fund budget for wildfire mitigation to the Hamilton Greenbelt.

"I'm going to wear a black hat for a minute," Smith said, adding the city has lost nothing to wildfires in the last 60 years. "Also, have we asked the people living along the greenbelt if they want it (the wildfire mitigation actions)?"

Council Member Laurie Higginbotham said the wildfire mitigation stamped onto the 2019-20 budget is due to Lake Travis Fire Rescue's assessment that the Hamilton Greenbelt is a high-risk area.

"Just because it hasn't happened right in our backyard doesn't mean we're not free from the risk," Higginbotham said.

Council took no action during the Aug. 12 work session and will continue budget discussions leading up to the Sept. 16 deadline to set the 2019-20 tax rate.

The next budget work session is scheduled for Aug. 26.
SHARE THIS STORY