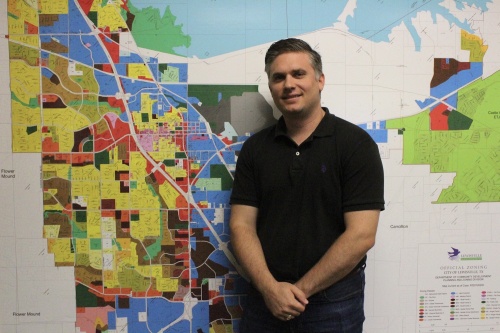 Jason Moore became the economic development director for the city of Lewisville in May.

After more than a decade of municipal work in North Texas, Jason Moore stepped into a new role as the director of economic development for the city of Lewisville in May.

And he has a couple of top priorities: rejuvenating Old Town Lewisville into a vibrant, multiuse area and retaining and expanding current businesses within the city.

Old Town Lewisville, when viewed on a map, is peppered with different zonings—a mixture of residential, retail, restaurant and light industrial. A proposed overhaul of the area’s zoning, set to be considered by Lewisville City Council in September, would reduce the seven current zoning types downtown into four districts: business, mixed use, warehouses and light industrial.

Most notably, the proposal, if approved, would get rid of the vast majority of light industrial zoning downtown—though existing light industrial businesses would be grandfathered in and allowed to continue operations legally as long as they do not go vacant for more than 90 days.

Moore said he believes this would be a “proactive” change that would help incentivize developers to do projects in Old Town because they would not have to go through the process to have a lot rezoned in order to build a multiuse development as it would already be zoned that way.

City staff have also said having less light industrial in Old Town provides better compatibility with the types of developments envisioned for Old Town in the Lewisville 2025 Plan, which details a variety of transit-oriented development in the area. In other words, the plan calls for diverse development that would allow residents to “live, work, play” with minimal need for cars.

Moore said for the last several years the city has been hard at work attracting businesses.

“We’ve got a lot of big businesses, some Fortune 500 companies, a lot of medical device companies that have moved in this area,” he said, adding that medical technology company DJO moved its global headquarters from California to Lewisville earlier this year.

“That’s brought a lot of attention to Lewisville,” Moore said. “And we gotta make sure we retain those types of businesses. Now we really need to get back out into the field and shake those people’s hands and make sure that they’re happy here.”

One of the key components to retaining businesses, Moore said, is ensuring Lewisville and the surrounding area can help offer them the workforce they need to operate.

“When you need a skilled workforce, like if you’re looking for a very specific field—that’s one thing, but if you’re looking for warehouse employees and some of the trades, it’s a very competitive market,” Moore said. “Somebody may steal some of your employees for 30 cents an hour more. And we’re hearing that across the region.”

Moore said the city is working with Texas Workforce Solutions and North Central Texas College to build a workforce that will help Lewisville remain competitive in terms of employment.

“Those are some of the things that we’re trying to make these businesses aware of, that we have these tools right here that they can access to help fill those employment gaps that they have,” he said. “A business can only grow and thrive if they’ve got the employees to do it.”

Though Lewisville has to compete with the greater Dallas-Fort Worth area for its workforce, the city does have its advantages, Moore said.

“We’ve got a great mix of housing and affordability here, so we can have people that are lab technicians, forklift drivers, welders, whoever,” he said. “We’ve got the population here to serve these businesses.”


Developments in the works

Moore said he likes to tell people there is about $150 million in developments on the horizon, and that they will be finalized any day now. Though sometimes “any day now” can mean six months down the line, he said.

“The craft of the economic development world is balancing the sense of urgency that everybody has with an appropriate amount of patience,” he said. “In our role, we want to get everybody to the table as quick as we can and make things happen. But if you don’t have the right patience, then you’re going to rush things and it’s not going to happen the way the community wants.”

Once developments that are already in the works start being constructed downtown, Moore said there will likely be a “windfall” of new building permits issued.

“Ever since J2 Steakhouse opened in [Old Town in] May of 2018, we’ve calculated building permits to have increased over 100% year over year,” he said. “That’s a significant telltale sign [of revitalization]. Some of those may just be a sign permit of someone updating the sign on their building, but that’s part of that revitalization process.”

The city is “strategically” purchasing parcels in Old Town so it can develop them in alignment with the vision for Old Town, Moore said.

Moore said there is an approximately 3.8-acre parcel of land off of Railroad and College streets that the city is selling. It is under a real estate contract with a developer, but it has not yet been formally closed. Though details of that potential development have not been made public yet, Moore said it would be in line with the city’s desire for transit-oriented development.

“We’re getting very close working on engineering documents at this stage,” he said.

The city is also in talks with a developer about a vertical, mixed-use development that would have retail and restaurants on the bottom, residential on the top floors and two levels of parking garages, he said. The project, if finalized, would be off of Mill and Elm streets and Main and Mill streets.

“This is all at a concept stage at this point,” Moore said. “There hasn’t been any formal submittals of engineering, but as we work through a development agreement to bring this type of development to the city, we feel that’s within the next six months of that being under contract, at least.”

As for Castle Hills, a master-planned community expected to be annexed into Lewisville in 2021, Moore said the city cannot yet legally offer developers incentives for building there. Castle Hills already has several upscale office and residential developments underway by Bright Realty.

“We greatly support businesses going into Castle Hills, and if that’s the site [businesses are] looking at, we always do what we can to promote Castle Hills,” Moore said. “[Castle Hills has] a different demographic from a socioeconomic standpoint when you look at kind of just the executive level summaries of their spending patterns, net worth and things like that. So it’s just a different dynamic, especially when you’re recruiting businesses. So there’s opportunities that will be there.”


Outlook on the future

Lewisville’s economy is typically buffered in times of economic downturn because it is within the Dallas-Fort Worth Metroplex and in relatively close proximity to the Dallas/Fort Worth International Airport, Moore said.

“We’ve got one of the best airports in the world, and that brings in so much commerce for us,” Moore said. “We have a logistics supply chain corridor that is very strong. No matter what the economy does, we’re kind of buffered just because we’re in the Metroplex; we’re bringing in jobs from other states; it’s creating the need for housing, whether that’s multifamily or single family.”

Transformation and revitalization are underway in Lewisville, he said.

“There’s always going to be things going on. So from my standpoint, I think I have the best and most fun job in the city—it’s never the same thing every day. So our outlook is completely optimistic. And the developers that we talk to are very optimistic for the long-term,” Moore said.