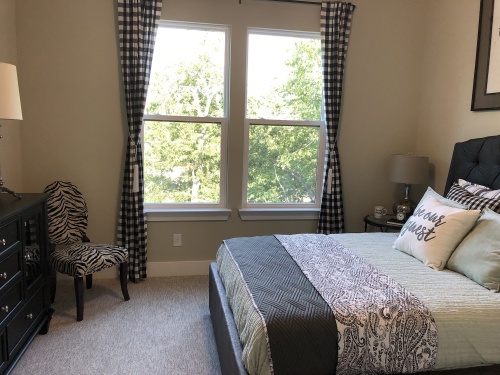 Developer Integrity Group marked another milestone Aug. 6, holding a grand opening for the model of its brownstone homes at the Residences at Roanoke City Center.

Potential residents can now begin touring the model and buying units at the complex, which will include 35 homes located in downtown Roanoke.

Two of the brownstones have already been purchased, Integrity Group CEO John Delin said. Another 15 have been reserved.

“There's such a great buzz about the brownstones,” Delin added. “People have been waiting for the model to be done so they can see the kind of quality of units we're going to have.”

Construction on the brownstones’ first building, which includes six homes, is completed. Two additional buildings are expected to begin construction in the next month.

The brownstones are similar to town homes, but their exteriors were designed to “mimic the true brownstone look out of New York City,” Delin said.

“They don't look like a typical town home would look like,” he added. “And they have a much higher-end design finish on the inside.”

“They’re units that fit in that urban environment because they’re based on a town home-type footprint,” Delin said. “You can get the density that you need to have enough people and make the housing somewhat affordable for people.”

The homes are located between Morningside and Crockett streets, northeast of Roanoke City Hall and on the south end of the city’s historic Oak Street. They are part of Roanoke City Center, a project being developed by Integrity Group. In addition to the brownstones, the company is constructing 311 residential lofts; an entertainment center; and retail, restaurant and office space at the development.
SHARE THIS STORY