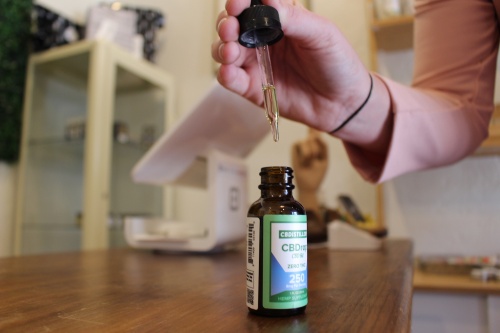 Several CBD retailers have opened in the Tomball and Magnolia areas in the last few months, such as Archaic Revival Collective and Natural Ways CBD and More.

Cannabidiol, commonly known as CBD, has become more available for Tomball and Magnolia residents in the last six months as local CBD experts have set up shop in the community and the 86th Texas Legislature has clarified the legality of CBD products.

“Due to the access of information—both bad and good—I think consumers and patients are more apt to educate themselves on CBD before buying a product,” said Steve Hoffart, the owner of Magnolia Pharmacy and a pharmacist. “It really is a lot easier to have conversation now than what it would be maybe 10 years ago.”

CBD is extracted from hemp or marijuana plants in the cannabis family and is sometimes confused with tetrahydrocannabidiol, or THC—the compound that produces the high that cannabis is famous for, Hoffart said.
Although CBD products contain traces of THC, quality CBD products do not contain enough THC to produce psychoactive effects, he said.

Previous law caused confusion on the legality of CBD sales because products with less than 0.3% THC have been legal in the U.S. since late 2018 but not in Texas, Hoffart said. CBD retailers and pharmacists in Texas offering products with any THC content were not legal until the state’s 2019 legislative session.

Gov. Greg Abbott signed House Bill 1325 into law June 10, making it legal for farmers to grow hemp as an industrial crop in Texas. The bill also redefined hemp’s classification, allowing up to 0.3% THC to be present in CBD products, the bill reads.

Abbott also signed a separate piece of legislation on June 14, opening up the use of CBD in the medical realm. HB 3703 expands CBD medication access from just patients with epilepsy to also include those with autism, multiple sclerosis, terminal cancer or an incurable neurodegenerative disease, the bill reads.

“I’m not always in support of state law lining up with federal law, but it made sense here,” said state Rep. Cecil Bell Jr., R-Magnolia. “Passing HB 1325 made sure that our pharmacies and CBD stores are in line with the law.”

David Yousenasna, a pharmacist and the owner of Tomball Health Mart, said he formulated his own brand of CBD products—called Pure Farmaceuticals—but also offers other brands at the pharmacy.

“While I can’t say that CBD is a cure for any disease, I’ve certainly heard patient testimonies that verify our understanding of [CBD]: It helps alleviate pain and bring balance back to the body,” Yousenasna said.

Dr. Michel Watkins, a pediatric neurologist at UT Health and Memorial Hermann-Texas Medical Center, said both CBD and THC interact with cannabinoid receptors that are located throughout the body via the endocannabinoid system—a physiological, regulatory system inside the body that is said to promote homeostasis, or stability—but the science behind this system is still poorly understood, he said.

“I think it’s something that’s going to have to be heavily researched. It’s just right now the only conditions we have approval for [to prescribe CBD products] are the things that have been researched,” he said.

Watkins said some patients have used CBD products to treat arthritis, anxiety, epilepsy, and other mental and physical ailments, but it is important to research the companies before purchasing a product.

Customers should also consult with a physician to determine what type of CBD product to purchase and to make sure it will not react with another medication, Hoffart said.

“Consumers need to know if they should be using an oil, salve, gummy, whatever it is, and that changes depending on what you are trying to accomplish by using CBD,” Hoffart said.

Watkins said CBD is becoming more widely accepted in the medical community as patients have seen benefits from CBD use, but it is still a new concept that needs more clinical studies and research.

“The more people understand about the difference between CBD and THC, it helps people to realize that they are not using the psychoactive component,” Watkins said.

After searching for natural remedies, Collins discovered CBD oil, which she said helped wean her off other medications.

“I wasn’t the wife or mom that I needed to be when I was taking those other medications,” she said. “I think that’s why a lot of people are open to CBD because they’re looking for more natural options than shoving more prescriptions into their cabinets.”

Bill Story, the owner of Natural Ways CBD and More, said his cousin’s child suffered from a seizure disorder that caused her to have 30-50 seizures per day. Upon using CBD products, he claims the number of seizures was reduced to 5-10 per day.

“It’s not a cure by any means, but it can provide symptom relief,” Story said.

CBD may also provide medical benefits to pets, said Amanda Deuschle, a certified veterinary technician and boutique manager of Archaic Revival Co. She said she believes it can help with animal health issues, such as chronic pain, hip dysplasia, arthritis, seizures and inflammation.

“This is not just a resource for people, but it’s also a resource for animals,” she said. “CBD is definitely improving the life cycle, lifespan and overall health of pets.”

Bell said he believes while Texas—including Tomball and Magnolia—traditionally holds more conservative views, the state is embracing CBD and its medical benefits with the passage of HB 1325.

“Hemp is a food and fiber product that got caught up in the efforts to criminalize marijuana [in the 1930s]  because it also comes from cannabis,” he said. “As a staunch conservative, I don’t have any opposition to CBD products or hemp.”

One issue following the passage of this bill, however, is law enforcement personnel do not have the appropriate field tests during roadside stops to determine if products in question exceed the legal amount of THC, Bell said.

To combat this problem, Montgomery County commissioners approved the creation of an account to fund the testing of hemp and marijuana at a July 9 Commissioners Court meeting.

“I don’t believe we have a disproportionate response to marijuana, but we’re also not looking the other way,” Montgomery County District Attorney Brett Ligon said during the meeting.

Also as a result of HB 1325, Harris County District Attorney Kim Ogg’s office will no longer accept criminal charges for misdemeanor possession of marijuana—4 ounces or less—without a test result proving the substance has a THC concentration over 0.3%, according to a July 2 press release.

With the new CBD-related legislation, it is important to be educated on CBD, Yousenasna said.

“The more people [who] are educated about the differences between CBD and THC, how CBD works and the endocannabinoid system, the less stigma there is,” Yousenasna said. “People here are more open-minded than you might expect.”

Andrew Christman and Kelly Schafler contributed to this report.