Rosehill Beer Garden offers something for all ages in Cypress 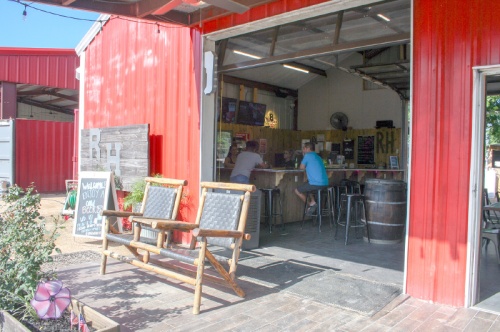 An indoor area at Rosehill Beer Gardennprovides guests with a shaded area to order drinks.

Eddie Jackson said he fell in love with the close-knit community of Cypress when he first came to the area seven years ago. When he discovered the space where Rosehill Beer Garden now sits—surrounded by residential neighborhoods—he recognized the potential to foster an environment where families could come together.

The Food Network personality and former NFL player said he always had a vision for opening a space like the beer garden. A food truck and handful of picnic tables were already attracting customers when he found the wooded 3-acre site on Cypress Rosehill Road. Once he bought it, Jackson said he set out to make the area a family-oriented hangout spot.

“Out here, you really want to give these parents [an opportunity] to be able to still have fun but also be able to bring their kids and their pets and things like that,” he said.

Rosehill Beer Garden, which opened in February 2018, now features half a dozen food trucks, a beer menu with nearly all locally sourced brews, rows of open and covered picnic tables, a playground and lawn games. Jackson said he and the staff live by the beer garden’s slogan: “Good food, good company, good fun.”

Jackson said he tries to host community events and fundraisers at the beer garden whenever possible.

“That’s the good thing about not being corporate,” he said. “We don’t have to answer to anybody, so if we want to do a charity event, we can do it anytime we want.”

The most rewarding part about owning Rosehill Beer Garden for Jackson has been watching visitors interact, he said.

“There’s been [times where] we’ve had people come out here and [meet] their next-door neighbor that they lived next to for seven years, but it took a place like this for them to actually meet,” he said.

The “BBQ Blitz” host’s vision for the Cypress beer garden is ever growing, he said. In the short term, Jackson is hoping to expand on the beer menu and get more beer taps.

“I’m all about family, good food … more than anything, we just want everybody to have a great experience here,” he said.