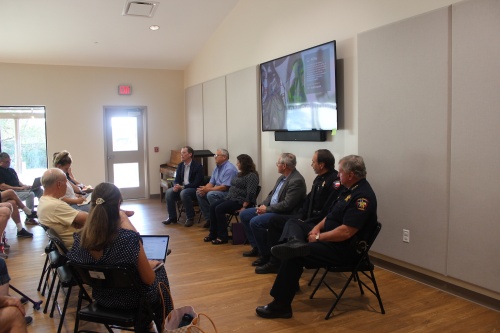 Correction: This article was updated June 20 to properly reflect the potential cost of a new traffic patroller for Hays County Precinct 4 and to reflect John Burns' title as Justice of the Peace.

Residents along Hwy. 290 from the Y at Oak Hill through Dripping Springs are pushing for ramped up safety measures along the highway.

The 290 Safety Coalition, a recently formed community action group, is circulating a petition to reduce the speed limit on an eastern stretch of Hwy. 290 that runs through Dripping Springs, between Trautwein and Nutty Brown roads. According to Texas Department of Transportation's Crash Records Information System, 221 accidents occurred in the past nine years within that stretch.

“I started working on this issue because I was going to get coffee with my two kids in my car, and I was run off into a ditch,” said Sarah Kline, president of the 290 Safety Coalition.

Kline said it was after discussing the accident with other area mothers that she decided there was a need for community action, beginning with the petition to reduce the speed limit. The petition has been signed by over 1,600 people so far.

Kline also made contact with Hays County Commissioner Walt Smith, whose campaign platform had included a pledge to address safety concerns on Hwy. 290.

Smith said his goal in organizing the panel was to explore the idea of collaborative solutions for Hwy. 290.

“I know that each one of the people on our panel tonight have tried efforts [to improve road safety] on their own,” he said.

Hood and Cutler emphasized the need for an additional patroller to increase enforcement along the stretch of highway near Dripping Springs, where a lack of access roads means driveways to neighborhoods and businesses often connect directly with the high-speed corridor.

According to Hood, an additional patroller would come at a cost of around $100,000 to the county.

“As soon as we drive away, people start speeding again,” he said.

Burns, however, said the consequences for drivers pulled over for speeding on the highway are not punitive enough to be a deterrent for many people who live in the area, which he said is largely affluent.

Several of the panelists expressed support for a decreased speed limit. Cutler said he agreed that reducing speeds could lessen the severity of accidents on the highway, but not necessarily the frequency of accidents. Distracted driving, including cell phone use, is an equally significant issue, he said.

Also, reducing the speed limit on the highway is not a simple proposition, Romage-Chambers said. According to Texas law, speed limits on state highways are set based on speed studies that determine the 85th percentile of how fast drivers are actually going on a given highway, due to safety considerations.

Romage-Chambers said a Hwy. 290 speed study is currently underway, as well as a study of intersection safety along the highway.

After the meeting, Smith said he was planning to bring recommendations on the issue to upcoming Hays County budget discussions, including a proposal to station two additional patrol cars on the highway.

“We need more enforcement here, and adding patrol officers is the quickest way to do it,” Smith said.