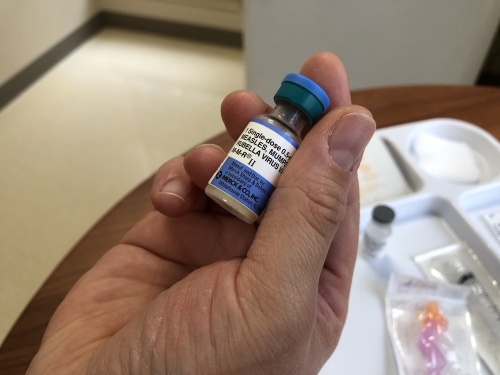 According to data from the Texas Department of State Health Services, the conscientious exemptions to immunizations rate among Williamson County students in kindergarten through 12th grade in 2017-18 was higher than the statewide rate.

In April, parents of students at Cedar Park Middle School received an email that one of their children’s classmates had contracted pertussis, commonly known as whooping cough. The highly contagious respiratory disease is on the rise nationwide, according to the Texas Department of State Health Services.

While the email did not specify whether the sick student was vaccinated against whooping cough, it emphasized the importance of administering immunizations to Leander ISD students.

“Immunization records should be checked, and any child or adult who is under-immunized or not immunized should follow up with their physician to receive [an] age appropriate pertussis-containing tetanus/diphtheria vaccine,” wrote Dr. Mary Ann Rodriguez, the interim medical director of Health Authority Austin/Travis County Health and Human Services, in the email.

According to DSHS data, conscientious exemptions to immunizations among Williamson County students in kindergarten through 12th grade was at 2.68% of students in the 2017-18 academic year. This is over double the statewide rate, and Travis County’s rate is higher.

Dr. Caroline Hilbert, the director of immunization advocacy for the Williamson County and Cities Health District, said the Central Texas area sees lower immunization rates due in part to two particular economic groups: families below the poverty line and those who are wealthier.

“It’s a mix of higher-educated, well-off, misinformed individuals making decisions that are affecting their child’s health and community’s health, and then individuals from families who just are struggling to make ends meet,” she said.

In LISD, the conscientious exemption rate was at 1.51% of the student body in 2018-19, the lowest it has been since 2015-16, according to data from the DSHS. The rate in LISD has rose and dipped over the past several years. However, according to 2012-19 data, LISD’s rate is consistently above the statewide conscientious exemption rate each year. The statewide rate has trended upward each year over that time frame.

Families of children attending school in Texas are required to prove they have been vaccinated to the minimum state requirements. Per state law, though, parents and guardians may elect not to administer vaccines to their children under medical or conscientious exemptions.

Medical exemption statements may be written by physicians to excuse those who would be medically harmed by the vaccines, such as due to an allergy or chronic condition. Conscientious exemptions, however, are provided for children of parents who voluntarily decide to decline vaccinations for reasons of conscience, such as a religious belief.

Hilbert said one of the reasons private schools have lower immunization rates could be that parents seeking a private education for their children often exercise similar control regarding their children’s health.

Uniquely, Northwest Austin’s Holy Family Catholic School has a 0% conscientious exemption rate, per the Diocese of Austin’s policy, which does not accept conscientious waivers to immunizations, according to the school’s handbook.

Parents and guardians opt out of vaccinating their children for a variety of reasons. Michelle Evans—the former communications director and founding member of Texans for Vaccine Choice, a political action committee that advocates for conscientious exemptions—said most of the families she knows who opt out of immunizations previously vaccinated but decided to stop after what they found to be adverse reactions to the vaccines.

Evans, who is no longer involved with Texans for Vaccine Choice in an official capacity, said she followed the recommended vaccine schedule for her first child, who experienced reactions. Evans decided to pick and choose which vaccines to give her second-born child, and after she, too, had a series of reactions, Evans decided not to vaccinate her third child at all.

She did not seek medical exemptions for her children because of the conscientious exemptions available to them.

“It’s a basic human right that we not be forced to undergo any medical procedure,” Evans said. “It’s something that I should have the choice to accept or deny based on any reason I feel is valid.”

Jinny Suh is the founder and leader of Immunize Texas, an advocacy group promoting immunizations. She said an individual’s decision not to vaccinate can harm others by weakening herd immunity.

“The idea behind herd immunity is at a basic level cutting off the potential places where a pathogen can jump to from a person who’s infected,” Suh said. “When you have drops in immunization rates, you’re just allowing for more places for that germ, that pathogen … to continue growing and propagating and continue infecting.”

She said oftentimes people are contagious before knowing they have a disease and thus expose others to it.

“The vaccines have been so effective that the younger parents don’t personally know people whose children were born deaf because the mother caught the measles when she was pregnant, the older person who walked with a limp because of polio, et cetera,” Louviere said. “It’s easy for them to think that it is not that big of a deal when they don’t have personal experience with it.”

The World Health Organization lists “vaccine hesitancy” as one of its top 10 threats to global health in 2019. According to the organization, vaccines prevent 2 million-3 million deaths per year across the world, and if coverage of vaccinations improved, another 1.5 million deaths could be prevented.

Loni Gofran, an LISD parent, said she developed an autoimmune arthritis following hepatitis B vaccines as a teenager. She said she thinks her children would be at risk of a reaction, but they do not qualify for medical exemptions, which is one reason she thinks vaccines must remain optional. Additionally, she has concerns about an absence of liability for vaccine manufacturers.

In 1986, Congress approved the National Childhood Vaccine Injury Act, which reduces liability for vaccine manufacturers and health care providers that are sued by people who believe they have been injured by vaccines. The Centers for Disease Control and Prevention states on its website that damages awarded for vaccine injury claims raised the cost of vaccines in the 1970s, and some manufacturers stopped production, resulting in a shortage that was solved by the passage of the act.

“The vaccine industry is a multibillion-[dollar] industry that holds no liability for the safety of its products,” Gofran said. “Right now, manufacturers have no motivation to make vaccines safer.”

Vaccines must be tested extensively prior to licensure through the Food and Drug Administration, according to the CDC. After licensure and implementation, the FDA monitors vaccine samples and reactions to vaccinations through the Vaccine Adverse Event Reporting System.

Hilbert said the benefits of immunizations far outweigh the risks of adverse effects.

“Nothing in the world is 100% safe, and with vaccines they’ve shown that there’s a 1 in a million to 1 in 2 million chance that you can have really severe side effects from a vaccine,” she said. “From a public health standpoint and [with] how deathly a lot of these diseases can be, that’s the individual, very minimal risk that we take on for the protection of our population as a whole.”