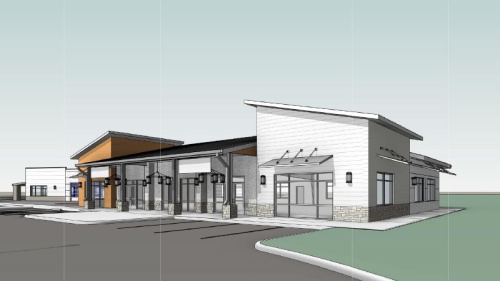 Building C of the Paddocks at Bee Creek is shown.

The Paddocks at Bee Creek is a business development in the works that will primarily contain medical offices, but its three buildings will also contain room for office and retail establishments.

Tommy Reagan, president of Bee Creek Stables LP, the company that owns the land, said the project is four years in the making but just now starting to gain momentum.

Lakeway City Council approved a request May 20 from Bee Creek Stables LP to reconsider a condition on a special-use permit restricting access into the buildings.

Reagan said the first building should be ready by early 2020 at the latest with preconstruction steps ramping up through the month of June. He added the other two buildings still need approval from city staff, but the site plan has been approved.

Council approved the original permit April 15 and required access be limited to a right-in, right-out entrance for the complex off Bee Creek Road. Reagan requested reconsideration of the permit May 20, specifically asking for a change in the access restriction.

Lower traffic counts on Bee Creek as opposed to RM 620 and Hwy. 71; an extended line of sight approaching the project’s proposed intersection; and requiring traffic to only exit right out of the complex, which may force dangerous U-turns, were some of the reasons Reagan provided for lifting the restriction.

Easier access to the development, combined with its location near Lake Travis Middle School in an emerging area in Lakeway that also includes a large sports facility called the Bee Creek Sports Complex make it an ideal setting for medical and retail offices, Reagan said.

“As far as this [development’s] exposure to being near a school, they’ll have potentially 400 or 500 new clients every August and September driving past,” Reagan said. “Being next to the sports complex is advantageous in the same way. There will just be a lot more traffic coming through that area in general. We’ve got a middle school and a sports complex, which will add exposure.”

Reagan said one dentist has signed a lease, and some potential tenants have shown interest, but since the development is still in the early stages, it is still too early to know which clients might end up in the facilities.